Waking up to a friend’s text informing me that Enjoy Music Festival was to be delayed by three hours because the organisers were still waiting for toilets to be delivered left me sighing and shaking my head into my hands.

Aberdeen is not a city that enjoys much of a reputation in the way of being artsy or cultural, and even with the beautiful and thought-provoking murals that have recently popped up in some of the most drab areas of the town – the first emanations of colour seeping through the cracks of a grey granite, oil-stained metropolis – there is much work to do to elevate Aberdeen to its rightful position as a truly great cultural city.

And this is why I was anxious after hearing about the morning delay; it was important that Enjoy Music was a success. Aberdeen deserves a proper music festival; it deserves the likes of Primal Scream.

Having arrived slightly later on one of the shuttle buses running regularly from Union Street (an excellent move by the organisers), my worries quickly dissipated. Security was tight, but the mood was jubilant, and laid across the lush green expanse of Hazlehead was a sprawling menagerie of stages, music tents, toilets (thankfully), and lots of happy drunk people.

Despite at times feeling like “T in the Park comes to Aberdeen”, there was much more of a family friendly vibe to the event. Indeed, there were lots of young kids in the crowd on their parents’ shoulders, enjoying for the first time the live experience their mums and dads thrived off when they were just rebellious teenagers ignoring their own parents’ pleas to be careful and drink enough water.

Not everything went off without a hitch. Even with the arrival of toilets there still did not seem to be enough of them, the queues running uncomfortably long. There was also not much in the way of food provided apart from a burger van (more long queues) and some ice-cream.

And of course, the rain; the bane of every outdoor festival. While it first it was tolerable, after an hour or so of torrential downpour it began to test everybody’s endurance. There was no shame in hiding in a smelly cubicle to dry off for a few minutes, or creating a makeshift shelter out of four wheelie bins with the lids flipped up, as a few intuitive and very welcoming people did.

I took cover with them, sat on their carpet (a blanket) as they fed me chips and sauce, sustenance for the rest of a long evening of partying, before finally and thankfully the sun blossomed out for Primal Scream. That is what festivals are all about.

And even with the delays and glitches and imperfections, there was the sense that this was just a learning curve, as largely it was a successful festival with some pretty fantastic acts. It can only be upwards and onwards from here, and hopefully a bigger (and sunnier) event for next year. 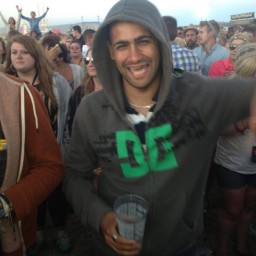