From Fri 8 to Sat 23 June, Glasgow’s Iota Gallery is hosting an exhibition of the work of Edinburgh-based illustrator, writer and comic book artist, Stref. The exhibition will showcase a diverse body of work from throughout the artist’s three-decades-long career, including early commercial pieces, samples from graphic novels, children’s comics and sketchbooks, as well as debuting a new project.

Stref, whose real name is Stephen White, worked extensively for D.C Thomson, illustrating The Beano, The Dandy and Oor Wullie and the Broons, before joining the team at Viz in 2016.  He has also published several successful graphic novels, including Milk (2010) and Raising Amy (2011).

Stref is perhaps best known for his 2015 collaboration with colourist Fin Cramb, an innovative transformation of JM Barrie’s children’s classic Peter Pan, published by Birlinn Ltd. The charm of Stref’s Peter Pan lies not just in the pure aesthetics, or in the obvious pleasure any retelling of the perennial children’s classic automatically elicits. While the illustrations are captivatingly beautiful, the work’s avoidance of cliché and the unapologetic inclusion of the darker elements of the original story that have been glossed over in other versions is what gives the book its unique appeal, and a renewed sense of authenticity.

The origins of JM Barrie’s Peter Pan are undeniably tragic, as the author was inspired to create the character after the premature death of his brother at the age of fourteen.  It is fitting, therefore, that Stref’s personal connection to the story is also somewhat dark, and far from fairytale-esque: one of his earliest memories is of being taken to see a stage production of Peter Pan at the King’s Theatre when he was three. As Peter was supposed to make his grand entrance, a fire ignited in the theatre, and frightened children and parents were swiftly ushered out of the building.

Perhaps partially influenced by this event, Stref resolved to, in his words, “de-disneyfy” the story. Therefore, he consciously avoided replicating iconic images from the 1953 animation, such as the one of Peter and the Darling siblings flying past Big Ben. Instead, he felt it would be more meaningful to show the characters flying over Great Ormond Street Hospital for Sick Children. This is particularly poignant, as JM Barrie gave the copyright for Peter Pan to the hospital in 1929, ensuring that all proceeds from books, films and stage adaptations would go towards advancing treatment and supporting children battling illness.

This interconnection or symbiosis between childish fantasy and the harsh realities of life is a theme in much of the work presented in the exhibition. The centrepiece is the sensitive, decidedly moving semi-autobiographical work, Plop – a runner up in this year’s Jonathan Cape/Observer/Comica Prize competition. In Plop, the childish act of stone-skimming is used as a leitmotif and interweaved with allusions to more grown-up concerns, and less romantic, occasionally overtly bleak aspects of life, such as illness, loss, the complexities of identity, sex, relationship breakdowns and isolation.  The stone-skimming motif makes the work reminiscent of Norman MacCaig’s poem Small Boy, in which the speaker observes a child throwing stones into the sea. The speaker is struck by the simplicity of the activity and the naiveté of its apparent lack of purpose – the boy “wasn’t trying to fill the sea/ He wasn’t trying to empty the beach.” He is “like a kitten playing.” MacCaig laments that this pure, unselfconscious playfulness will disappear when the boy grows up, which will be to his detriment, as “there’ll be so many things/he’ll want to throw away/if only his fingers will unclench.”

The impulse to retain a sense of levity and irreverence feels very pertinent for an artist who, having garnered widespread acclaim for Peter Pan, and after sixteen years of working for Establishment institution DC Thomson, decided to move to maverick rival publication Viz. Stref now spends much of his working day drawing mischievous parodies of the strips he used to illustrate in features such as Oor Prince Wullie and The Broon Windsors.

Stref’s wonderful contrariness and contradiction has been a defining feature of his output over the years. He has previously acknowledged that while, unlike most other artists, he seems to have no recognisable, signature style, his playfulness and eagerness to experiment is partly what makes his work consistently varied and challenging for him, and so interesting and engaging for audiences. Indeed, the Iota exhibition is a ramble through a staggering variety of styles and projects, created with a diverse range of target audiences in mind. Settling on a clear identity or brand character would be far too dull and serious for an impish spirit like Stref. How fitting for the man who produced such a beautiful and affecting re-telling of Peter Pan to be the creative embodiment of JM Barrie’s line: “All children, except one, must grow up.” 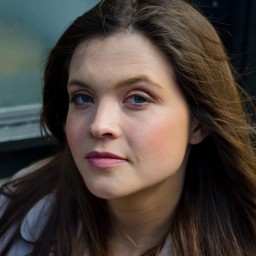