A stoic if reliable hour of daftness.

Cold Hard Cache, the debut Fringe hour from Amy Gledhill and Chris Cantrill, a.k.a. The Delightful Sausage, is an hour of daftness from two comics who complement each other very well. Cantrill is eager and expressive, with excellent natural timing. Gledhill is self-aware and silly, with a great ability to flip-flop between high and low status as the situation demands. The show is consistently funny, and occasionally excellent, with some really well-crafted jokes beautifully delivered. As a pairing Cantrill and Gledhill are fluid and symbiotic, with neither of them ever trampling over the other’s gags even during moments of ad-lib and improvisation.

Having a show that’s so heavily reliant on a digital projector is brave, and not without inherent risk. When the technology does occasionally and inevitably fail, Cantrill and Gledhill cover it very well, but the show does feel inescapably shambolic as a result. At one point during a particularly intricate bit of on-stage business, the projected slideshow is interrupted by Cantrill’s Outlook calendar reminder, to the obvious delight of the audience.
Cold Hard Cache is never really very surprising or adventurous, being a fairly stoic if reliable hour – indeed, the epithet “strong and stable” (subject of one of the weariest gags in the show) could be applied fairly accurately. Unfortunately, the few characters and sketches within the show are never allowed long enough to establish and develop. All too often, the show feels like a series of back-of-a-beermat suggestions for scenes, rather than fully fleshed-out scenes themselves. The grand finale – an exploration of the “dark web” – is handled almost entirely by Cantrill, with Gledhill awkwardly sidelined.

There are, though, some absolutely lovely moments, including some pure unconnected surrealism on the projector. It’s all tightly plotted and well paced, leading to a satisfying (and cheekily underscored) climax. 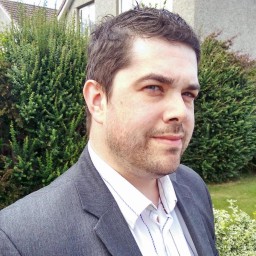