You’d think that having one Fringe show would be enough stress for any comedian, but not for Gráinne Maguire: her evening performance is her second of the day. While her afternoon show at Bob’s Blunderbus, What Has The News Ever Done For Me? is a topical, collaborative event with other comedians, Great People Making Great Choices is solo stand-up, with Maguire presenting more personal material.

Maguire’s set is based around the theme of the stories that we tell ourselves, and the things that we choose to believe. Her observations move between the autobiographical to the general; she’s at her funniest when she’s talking about herself, with some hilarious and poignant anecdotes about a previous relationship. There’s an amusing if edgy piece about how she’s always had a vague belief that she’d make a cute idealised heroine in a similarly idealised civil war – ‘Not the Irish civil war, obviously, not a messy civil war, a fun one. Probably one like the Spanish one, because I don’t know much about it.’ With a knowing smile, she sports a few 1930s accessories while pretending to sweet-talk George Orwell.

Some of her broader material is less distinctive, and Maguire does repeat a section about national stereotypes at one point, presumably by accident. This section also does the rather frustrating thing of discussing England at length while ignoring the current location of her show altogether. However, her informal, likeable style of confessional comedy keeps the audience generally happy.

Towards the end, the show takes a turn towards the political, with Maguire talking about the lack of access to abortion in Ireland and her related decision to tweet facts about her periods to the Irish Taoiseach – inspiring many other women to do the same. It’s an important and hilarious section, but things start to feel a bit rushed at this point, with Maguire hurrying her words. A bit of restructuring to extend this section would significantly improve the show.

Things are wrapped up well, with Maguire ending on a fairly optimistic message as she prompts the audience to rethink the stories we tell ourselves. It’s an enjoyable and generally fun hour, if in need of a few changes to the pacing and content. 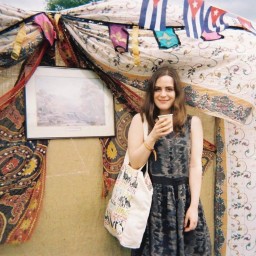