Boasting incredible performances and genius dialogue, this is a play that really packs a punch.

It tells the unconventional love story of “Gorgeous” George O’Connell and Dane “The Pain” Samson. Two boxers who are on a collision course with their roots, identity, and each other.

Not only is their journey utterly compelling, it’s told without resorting to any of the usual cliches. In fact, this production surprises and delights at every turn, playing with our preconceptions of what it means to be a man, let alone a gay one.

You can also expect a certain amount of nudity, and one rather memorable sex scene. All of which give this performance a feeling of grittiness. So while some productions never let you forget you’re in the theatre, Gypsy Queen quickly pulls you into the characters’ world.

Speaking of which, Rob Ward and Ryan Clayton not only play the lead roles, they also play all of the supporting ones as well. Of particular note, is Ryan as George’s Irish Catholic mother. Not only does he deliver comedic moments with real poignancy, he makes the c-word sound like poetry

In some instances, these talented actors seamlessly juggle up to three characters in the one scene. But thanks to their undeniable acting chops, and Adam Zane’s direction, the transitions are a thing of beauty.

Happily, this was the first show we saw at this year’s Fringe, making us instantly excited about the month ahead. With dialogue, performance and a message that’s truly inspirational, Gypsy Queen is the very definition of great theatre. See it before the month is up.

Gypsy Queen continues at the Edinburgh Fringe until August 26, then heads to:

Read our interview with the cast of Gypsy Queen at  Otro Restaurant HERE. 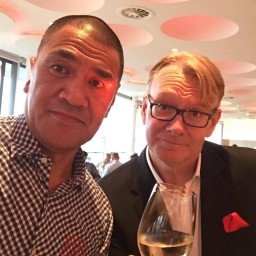