The first Fringe outing of the all-new female Handlebards is a triumph.

In the spirit of equality (and not before time), the Handlebards have put together their first female troupe along exactly the same lines as their male counterparts. Four women, playing multiple parts, with a delightful mixture of a love of Shakepseare’s plays and the courage to make them extremely silly. It’s a formula that works, time and again.

To choose The Taming of the Shrew is a brave decision as it is, essentially, a cruel play with an abusive relationship celebrated as a triumph, and one which contemporary audiences are not as readily familiar with as, say, A Midsummer Night’s Dream. Portraying the characters using an all-female cast does go some way to undercut the sexism, and it features some great send-ups of traditional masculinity – with tiny (and not so tiny) elasticated bulges and a lot of thrusting and frat-boy high fives. One only slightly wishes that they had re-written the ending and had Kat stab Petruchio firmly in the balls after her long speech on the natural submissiveness of wives to their husbands (which is, it must be added, beautifully delivered) But that is a complaint for the late 16th Century, rather than the modern company.

The Taming of the Shrew is brave, bold and very funny; but still, Romeo and Juliet fares even better. The Handlebards give us a tender and touching production, whilst still managing to get away with a lot of piss-taking. The relationship between the famous star-crossed lovers is delicate, particularly in the opening scenes when they first fall in love. The silliness doesn’t detract from what is, when done well, a very upsetting love story – rather, it heightens the bittersweet contrast.

By choosing two plays split into couplings – in that they each feature two characters who take top billing – all four Handlebard women get a part to really sink their teeth into. Elanor Dillon-Reams plays as Petruchio a swaggering frat boy, with a centre of cold arrogance (though she excels equally in supporting roles, notably as a sozzled Lady Capulet). Lotte Tickner as Kat/Bianca gets to flip between a giggly coquette and an impassioned, aggrieved young woman, dignified despite all that is done to crush her. Lizzie Muncey pitches Romeo just right – he starts off petulant and rather self-involved with the concept of love, before becoming consumed by another, burning across the stage with youthful energy. And Lianne Harvey as Juliet is beautifully sweet, passionately hopeful and brave to the end. With such a talented band (both on and offstage), it’s seems likely that the female Handlebards will become a permanent fixture. Or at least, I certainly hope so. 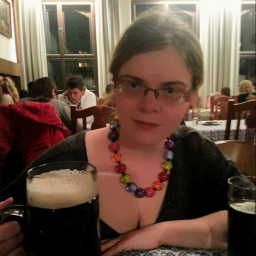