John Kearns returns to the Edinburgh Fringe Festival with a new show, following his Best Newcomer and Best Show award winning runs of 2013 and 2014.

The beautiful thing about the Fringe is the abundance of people who have something special, contemporary, interesting and at times heartfelt to say. Kearns has managed to create a show that mixes all these ingredients. The man is clearly talented, and after comedy awards and various TV appearances, has rightfully acquired a following.

Exactly what Kearns does is quite hard to define. It’s comedy, but there are few to no jokes. An hour of odd comedy, with no jokes, in perhaps the hottest room in Edinburgh. Yet it is original, brave and very funny.

Following Kearns’ every word is sometimes difficult, like listening to a slurring drunk in a pub, late at night, teetering on the edge of a blackout. The comedy teeth, shrill voice, and shouty style are all important components of the shtick, but as the narrative goes from a betting shop, to a massage, a supermarket checkout, and then a horse race, concentration is required if one is not to be left mildly confused or lost at any point.

The pace is almost relentless and only lets up when Kearns banters with the audience or touches the wall. Without revealing too many spoilers, the show contains a bet which wins against all odds, and turns into an emotional yet hilarious story that highlights the fragility and absurdity of life.

It is, at times, a curious distraction to watch the copious squirts of saliva jet from Kearns’ excited mouth and onto the gurning faces of people in the front rows. At one point his teeth fly out mid-sentence, hit the floor with a scutter, no doubt catching hairs, dust and micro detritus. A dedicated fan hurriedly grabs them for Kearns to quickly pop back in his mouth without a word, like a kid in the playground adhering to the five-second rule. The audience loves it.

The sky really is the limit for Kearns now. Or should that be the many clouds? Go and see the show to understand and not laugh at this reference: you won’t regret it. 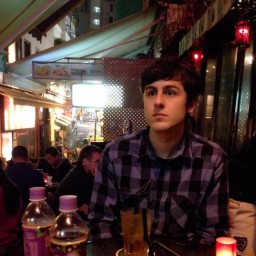