“Meta comedy” is becoming increasingly popular in the Fringe – and with successes like The Play That Goes Wrong, it is not hard to see why. Not only is it funny; it also gives writers a change to showcase their creativity and ability to provide humour on multiple levels. This is exemplified in Willis and Vere’s latest contribution to the Fringe, The Starship Osiris.

Vere – known as a “lanky prick” to his cast – has put himself in the role of the starship’s captain, George Harrison. Clad in black leggings and a purple turtleneck, he has dedicated his life to protecting the galaxy from evil, along with the help of his trusty sidekick Evans and three space cadets (all of whom seem to be enamoured with him and his tinfoil Star Trek-esque badge).

However, things start to deteriorate when Evans commits a mutiny and takes the rest of the crew with him. What follows is a hectic hour of nail guns, champagne, and everyone swapping costumes at least once. Oddly, the best bits of The Starship Osiris are not the moments when everything is at its most ridiculous; it’s amusing to see random members of the audience being given scripts and asked to stand in for Evans and the other actors, but it is actually the first half of the play – when tensions among the crew are underlying – which is funnier, due to sharp writing and the merciless rehashing of traditional Sci-fi tropes.

The play could probably be about twenty minutes shorter and not lose any of its impact as the constant running on and off stage starts to lose its comedic effect; although the space worm constructed out of spray-painted tents is a genius touch. There is no shortage of laughs throughout the entire show and it never feels boring, but this is again down to a clever script as opposed to purely physical gags. Overall, despite a slightly unsteady plot in places, the Starship Osiris is an incredibly enjoyable and lighthearted watch. It doesn’t take itself – or its egotistical, fabulously overacted director – too seriously. 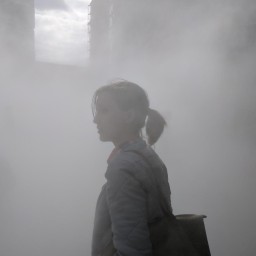