Sarah McIntosh speaks to the creator of Vive la Difference about his description-defying performance.

The most enticing aspect of the Edinburgh Festival Fringe is not agonising over which version of Antigone or Othello to catch, or managing to bag the last two tickets to that comedian off the telly. No, it’s finding that tantalising, impossible to catagorise show that crosses boundaries and stays with you long after lights out. Thierry Alexandre’s Vive la Difference might just be that description-defying performance.

Thierry Alexandre is a beautiful London-based Frenchman. For the interview he arrives wearing a floor-length kilt complete with sporran, a delicate blouse with lace trim and a fake fur gilet trimmed with black ostrich feathers. Upon the auburn locks piled atop his head sails a wee three-mast galleon. He is gracious and open in his manner, without a trace of ego or pretentiousness and he exudes peacefulness.

His Edinburgh show, in his own words, ‘questions and explores some of the greatest dilemmas humanity faces in this world. It places traditional values in the spotlight, challenging the often confused and misunderstood roles of masculine and feminine, the pitfalls of civil obedience and disastrous effects of modern wars, of religious dogma, and experiments with life in a universe of truth, love and freedom of expression. But most importantly it delivers a unique insight into the great strength and beauty found in total vulnerability and openness, and how to communicate a whole range of emotions through intense presence, creating new possibilities; opening doors into a realm of magic, beauty, sensitivity and universal sharing.’

This performance is a literal coming out, an emergence after years of reframing ideas and finding inner freedom following a breakdown. Two mentors were crucial to this journey of growth. The first is Greg Branson of the Helios Centre in London, who not only helped him mentally and emotionally, but enabled his attendance at St Martin’s School of Art to strengthen his artistic framework, for it is necessary to know the rules before one can bend or break them. Branson’s total acceptance of even the darkest aspects of Alexandre’s psyche, ‘…he never rejected any of it and that gave me the opportunity to express that [darkness] safely, freely and therefore to let go of it…’ means that Branson remains a valued friend. The second but by no means lesser mentor was the larger than life Burnel Penhaul, known as Transformer. Penhaul, a contemporary of the late Leigh Bowery, encouraged the use of self as artwork, creating highly elaborate imagery with, as Alexandre puts it, ‘extraordinary visual impact.’ Through their work together at the nightclub Heaven, he says, ‘He taught me masses about costume making, extreme make up work with peacock feather lashes. Burnel propelled me into this world of magic and creativity. The first time I saw him I was speechless, this towering, monumental, costumed character who then took me under his wing to explore with costume and performance.’

It was this encouragement that lead Alexandre to search for a physical platform suited to his artistry. He finally found Butoh, a post-war Japanese dance form often referred to as the Dance of Darkness, and he consequently studied it for ten years. Seeming to be in opposition to the many fast and furious human circus acts at this year’s Fringe, Butoh captures the marrow of humanity combining extreme mobility with slow, meditative movements. The audience is made to view the human form in a different light, almost like a rebirthing of the soul and this is what attracted Alexandre to it. He explains, ’When I found Butoh, because I was midway through a profound personal journey, it fitted perfectly with the essence of what I was trying to achieve inwardly. An outward reflection of the things I was getting in touch with on the inside. One of the founders called it an “anti-dance” where dance aspires to lightness, elegance, beauty and aesthetic, but Butoh is very much concerned with the primordial, the animal, the natural ways for the body to fall, to stand, to move around. The human tendency is to speed up when we feel stressed or panicked. Our thinking and our actions speed up, and we do silly things. A lot of what Greg [Branson] taught me is based on slowing down and Butoh itself is all about learning to slow down and present a slow movement. But it’s not a slow art form. The importance is that you are going from a slow place within where everything means something. The performer needs to be completely open, truthful and completely connected with the people in the room.’

Themes of transformation are prevalent alongside a freedom found within a carnivalesque state of being outside the usual confines of perceived normality, giving the audience the opportunity to look deeper within themselves within a safe space – ‘People have a tendency to push away anything dark or difficult. Panic is just us peddling twice as fast trying to get away from it; we haven’t dealt with our darkness, we are very imbalanced. Balance is very important in physics but also in the human context. Hopefully audiences can witness my and other Butoh performers’ darkness without directly confronting their own but perhaps giving them permission to become easier with it. I am careful that it doesn’t overwhelm people; of course I want to show facets of myself, of the world, of an emotional palette they are not usually exposed to. But that palette is about balance so the darkness will move towards ethereal light in a transcending magical moment.’

Alexandre retains that sense of fun from his days with Transformer to include, within his performance, more playful aspects than might be expected, ‘the most humongous liquid silver dress you could imagine, a slow strip tease and a life size snow globe’ thus feeding the insatiably artistic curiosities of even the most seasoned Fringe-goers. 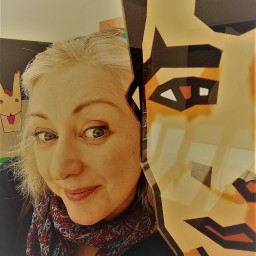