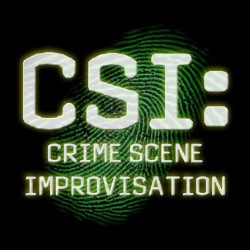 Fast-paced, engaging improv by the Chandeliers

The obvious blessing – and curse – for audiences watching improvisation is that every show is different. Groups who have to sit through a toe-curlingly awkward hour of either actors speaking over each other or refusing to speak at all can hold onto the vague hope that tomorrow will produce a slightly less painful routine.

For those who have seen the Chandeliers and their act, however, it is actually frustrating to realise that they cannot watch the same hilarious (albeit increasingly ridiculous) murder mystery twice. Luckily, this also makes it acceptable to buy another ticket for the next day – something that was being discussed by various members of the audience as the venue was clearing out.

It is clear that the Chandeliers have improvisation down to a fine art. They start the show by encouraging the audience to yell out professions, names and means of death – drug-dealing nuns and trebuchets, anyone? They also have a section where viewers can question individual members of the cast. Not only does this ensure that the audience is engaged throughout, but also hints at their confidence onstage – they are well-equipped to deal with any questions thrown at them, which is especially amusing when very astute fringe-goers question the glaring plotholes that only improv could create.

Of course, it wouldn’t be improv without a few awkward pauses and lines trailing off into silence, but the cast is experienced enough to deal with them masterfully. Furthermore, they keep the humour up throughout the entire show, with no dragging or unnecessary scenes. The act is reasonably kid-friendly as well; though it depends on the prompts given, the Chandeliers do not overtly rely on cheap innuendos to get their laughs.

CSI: Crime Scene Improvisation is a novel idea, and one that is executed superbly. The enthusiasm that every cast member brings to the stage is unmistakable, and leaves those who have seen it with aching sides and a reminder of what the Fringe was first created for; innovation and top-tier entertainment.