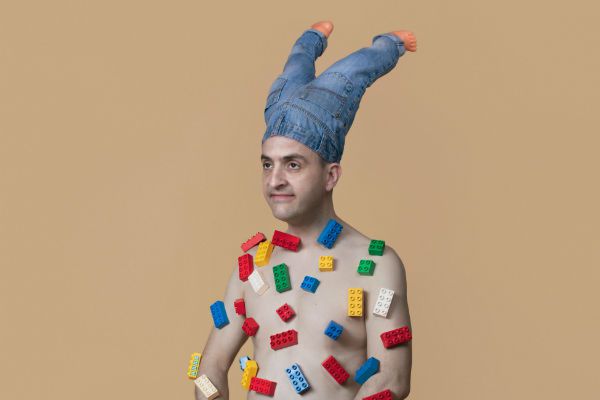 Brilliant, barmy character now with an added sad side

With The Herbert, Spencer Jones has created a character of endless possibilities. His pudding bowl hair and bad dress sense might vaguely mark him out as a nerd, but really, he’s way too strange and loveable to fit any normal human categorisation. He comes from a daft, psychedelic corner of the brain that can conjure faces and tunes and voices out of anything. He’s Mr Benn, played by Tommy Cooper, left alone overnight in the Chockablock studio and he is utterly hilarious. And this year, as if to show the possibilities of the character, an emotional family segment adds a new dimension.

The Herbert’s costume is the first thing he makes funny – huge neon shoulderpads and expanding leggings. Why? Just for the laugh. Sketches are similarly completely pointless, yet full of sense in the moment. A headless baby is a recurring prop. It’s tenuously a stand in for the Herbert’s/Jones’s son but really an excuse to use a grotesque glove puppet and explain the headlessness in stupid ways.

Anything can become something. He pretends to sit on a toilet so he can turn a toilet brush into a puppet, briefly a Donald Trump puppet, and then mock himself in his trademark semi-nonsensical way for not being Nina Conti.

There’s a five-a-side football sketch where he loops the audience cheering and chanting through the PA, just to set up a dopey slow motion scene where he’s a goalie that mistakes a teammate’s head for a ball.

In the best of the bunch, there’s a tricky-looking hi-tech sketch where he “scans” a member of the audience with an iPad to see what’s beneath the clothes. Let’s just call it the “dancing penis” sketch. It’s a sophisticated addition to the farting about with plasticky props.

There’s plenty of music too. The Herbert makes use of technology to create elementary electronic nursery rhymes where weird yelps and odd words leap out inappropriately.

But less is more. In last year’s show, Proper Job, repeated this year at the Underbelly, The Herbert barely completed a full sentence. The joy of it was that with one noise or speech fragment, The Herbert could convey more than most comics could do in a full routine. This time, we hear too much from him. He explains himself too often and the effect is spoiled.

There is one segment which does need some verbal build-up, however. There’s a portrait of his father and stepmother at the side of the stage. It’s fuel for a funny visual gag, and for a couple of crime caper sketches (his dad was an undercover cop). But the biggie is a deathbed scene. It’s played for laughs and to callback a catchphrase from earlier, but there’s something poignantly English about that itch to joke even in the most serious of situations that makes you wonder how much of this is drawn directly from Jones’ own life, and whether this is an oblique, touching tribute. Sad Herbert takes us into a different dimension.

Eggy Bagel is not quite as complete as last year’s unimpeachable Proper Job, and The Herbert talks too much, but it still sees the multi-talented Jones moving in interesting new directions. How the man isn’t a bigger noise beyond cult comedy circles, Lord only knows.