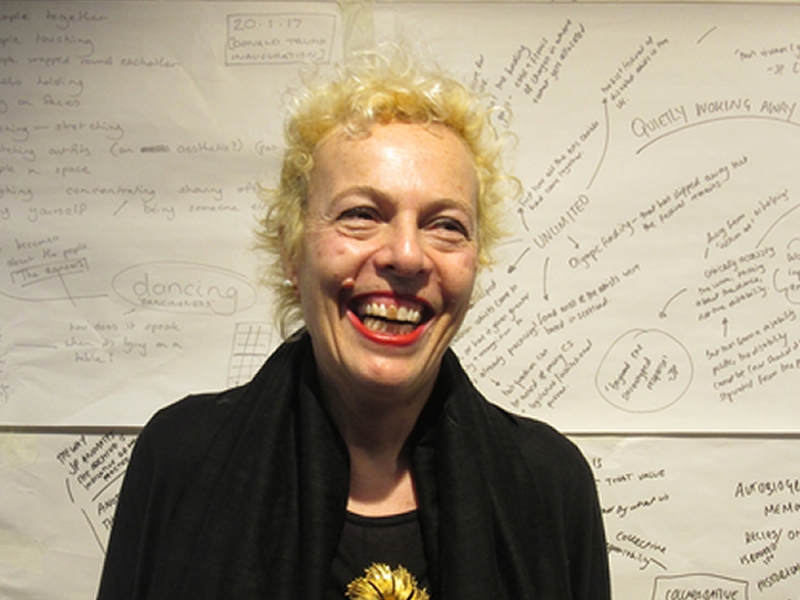 Adele Patrick is the Lifelong Learning and Creative Development Manager at Glasgow Women’s Library. She is a guest curator at the Edinburgh International Book Festival 2018 with Revolting Women.

Adele Patrick is a charming advocate for girl power. She speaks carefully and eloquently, and with her striking style, keen gaze, and enthusiastic smile, she’s an easy person to talk to. It is also a pleasant surprise to get a warm hug on parting.

She explains that she is from “a working class background of bouffanted, formidable, feisty, matriarchal women” and the word revolutionary appears and reappears throughout the conversation, not least in what she calls “my role as an older woman in the movement”. None of her passion for women’s equality has flagged since she started to foment Women in Profile in 1987/88 which aimed “to re-brand Glasgow away from a masculinised culture to be more inclusive for European City of the Year in 1990”.

Glasgow Women’s Library (GWL), where she works today, has just been pipped to the post as Art Fund Museum of the Year by the Tate’s St Ives branch. Just now off the London train, she speaks creatively and eloquently in response: “We realised how monolithic the establishment is and were really pleased to be the grit in the oyster. There we were, sitting in the V&A (Victoria and Albert Museum where the awards took place) in the belly of the beast surrounded by the Rubens (whose God the Father hangs there) and in the company of the guardians of culture, the old boys’ and girls’ clubs, proud to have rattled cages. But it is also sobering. It would have been a brave decision to give us it”.

She goes on to explain that the library are now preparing to unleash their collective response. “We are the first equalities organisation to be in the final, so it is apt to share our experience,” she says. “Someone told my colleague, ‘well, it is a sexist organisation isn’t it?’ referring to the Women’s Library. There is certainly no place for complacency!”

She is reading Helen Pankhurst’s Deeds Not Words, which is part of the Pioneers and Provocateurs event at the Edinburgh International Book Festival with Fern Riddle. She explains that it reminds her both of what the struggle for equality has achieved and how far there is still to go. “The book contextualises the route of change from the first-wave of feminism through politics, reproductive health, and women’s representation. The gestation period for change is so incredibly long. The tenacity of resistance to relinquish power is unbelievable.” She asserts that this year, 100 since the Representation of the People Act, is “a critical one to do something brave”.

Patrick is one of the Book Festival curators and her theme’s title is the delicious and courageous Revolting Women. She chose Pankhurst (great-granddaughter of Emmeline) alongside luminaries such as Hilary Clinton, and there are any number of other delights to choose from, the most lauded of which are the Herland (say her-land) Salon and the Take-Over Tents. The former were pioneered by the GWL in the Scottish West, so are coming to Edinburgh for the first time.

With characteristic excitement, she says of the Take-Over Tents, “I am absolutely thrilled, it’s going to be utterly brilliant, especially the pay-what-you-can fact of it. It will be a crucible for showcasing what women do, in a safe space and to a mixed audience, because still these types of spaces are few and far between when showing more diverse work.” Heir of the Cursed will be there (described as “a caulbearer born of an apparition, a primordial memory, a penny drop in the wee hours” by Sofar Sounds) giving us her own songs and doing feminist lullaby workshops. There will also be militant T-shirt printing sessions inspired by the pop-up library titles. (Incidentally if you have any spare white ones, please send them to the GWL).

This year, young women have again been involved in the planning of the programme and taken a leadership role. In the past, those who had done so followed up with a trip to the festival where they met published authors whose backgrounds were similar theirs, who had also survived depression or experienced similar poverty. It is vital to Patrick that such budding lasses have these opportunities, because “you never know what they will do with them. In meetings with politicians I’ve spoken a lot about how diminished women’s dreams and ambitions can be, the criminal lack of aspiration, the narrowness of expectation for women (also in the education system). I have a vision of a different future because I have seen how remarkable the results can be given a tiny bit of encouragement.”

There are many other fantastic ideas: every woman writer who is taking part in the Book Festival has been asked for a Spotify list of her choice of revolutionary music to form the soundtrack to the Herland Salon; four women-of-colour will focus on detoxing institutions (such as museums) in Breaking Down Barriers; Queer Africa (the GWL has strong connections with Nigeria) features short stories of feminism and intersectionality from contemporary Africa; and “part of our aim for the Take Over tents is that the names of the Scottish women who got us the vote will roll off the tongue in the future – we have strident spine poems, manifesto workshopping and we hope to fuel your appetite for change. Obviously there will also be tea and buns!”

As I watch Patrick walk away, I noticed the inscription on her bag: Diversity is being asked to the party; Inclusion is being asked to dance. It strikes me that her work is all about inclusion – she is not only developing intelligent and ground-breaking projects, but at the same time she has her eye on the deep underlying issues. She is using the knowledge and wit that she has built up through years of experience which in turn has given her an understanding of how to tackle those who still, whether knowingly or unconsciously, oppose genuine equality. “Most people do subscribe to these shared values,” she says, “but in the work setting in particular there’s a mismatch between individual principles and this lack of alignment that we are seeing.”