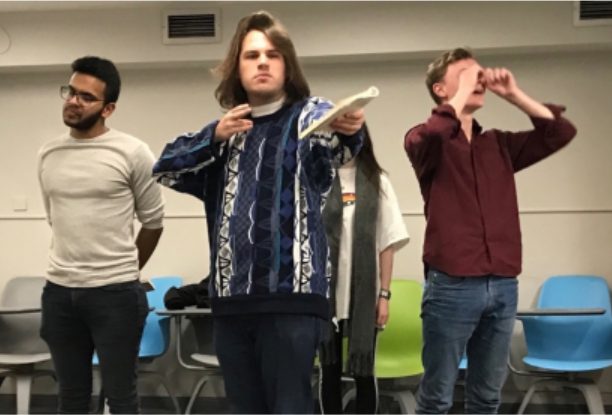 We chatted to the directors coverting Bedlam for a version of Timberlake Wertenbaker's play.

Bedlam Theatre will be getting a makeover this month for an ambitious production of Timberlake Wertenbaker’s 1988 play Our Country’s Good, by Edinburgh University Theatre Company and the University of Edinburgh English Literature Department. Always happy to hear about new stuff in one of our favourite wee theatres, we spoke to the two directors, Jane Prinsley and Luke Morley, to find out more…

What’s the story behind Our Country’s Good?

The play is based on the true story by Thomas Keneally which tells the tale of the first convict ship full of British convicts and officers to arrive at Botany Bay, Australia in 1786. Surrounded by forbidding conditions and under the burning heat of the Australian sun, Lieutenant Clark attempts to bring literature, theatre and culture to the penal colony through a production of Farquhar’s The Recruiting Officer. As the barriers between captors and captives break down, they start to discover each other, both onstage and behind the scenes.

How did it come to be selected as the English Literature Department Production and what does that mean?

The play is a joint production with the Edinburgh University Theatre Company and the University’s English Department, which means we’re able to use the expertise of both organisations. It’s perfect because the play highlights the importance of literature and the power of theatre, so it brings out the best of both. We had to apply to Bedlam to get the production through a company vote. For the Edinburgh University English Literature play, there was a long application process, involving a written document and an interview, which resulted in us receiving the grant from the department. We think they liked the core message of the play, which is the power of education and theatre.

What was it about the story that appealed?

We both loved the thematic importance placed on inclusivity. This is something that is very close to our hearts, as dedicated members of the EUTC. At a time when politics and the arts can feel very divisive, the theme is relevant and important. The idea of theatre as an equalizer in society is a powerful one that we believe needs to be highlighted. Wertenbaker does this perfectly in Our Country’s Good through the large, inclusive cast, intricate text and staging possibilities.

How have you approached the production?

The play charters this idea of epic theatre, and has hence warranted a different approach to direction, looking at the play’s “episodes”. One example of this is the choice to use double casting, which has meant the cast have the opportunity to show their full range, as they play both convicts and officers – there’s something beautiful about showing the polarising ends of savagery. We also made the decision to cast it gender blind which has again enabled us to show the actors’ range without being confined to their gender. Having an unusual team of three directors has meant we are able to draw on our own individual experiences of theatre to cover every aspect: Jane has enormous talent in working very closely to the text, having excellent vision in detailed character work; whereas Luke has experience in working in ensemble work, something integral to the play. Cassandra is a wonderful mediator between the two and making sure the vision stays true!

Tell us what you’re doing to convert the Bedlam auditorium. What are you hoping that will bring to the play?

Bedlam will be converted into the semi round, with an extended stage and seating surrounding it. This has involved working with the council to ensure we meet all the safety requirements of a public venue. Our capacity has changed from 90 to 60 which means we really have to consider the intimacy of the performance. The actors have found it rewarding but challenging working in 360 degrees, and it has jeopardized their instinctual ability to perform end on as though in a proscenium arch theatre. We hope this staging will enhance the inclusive theme of the play as the audience and actors will be experiencing the production as a community. The actors will not leave the stage, joining the audience in their “off-stage” time, highlighting the redemptive power of theatre. Finally, Our Country’s Good involves a play within a play, so the staging will enhance the meta-theatrical element of the play as the cast and audience will hopefully feel the power of theatre.