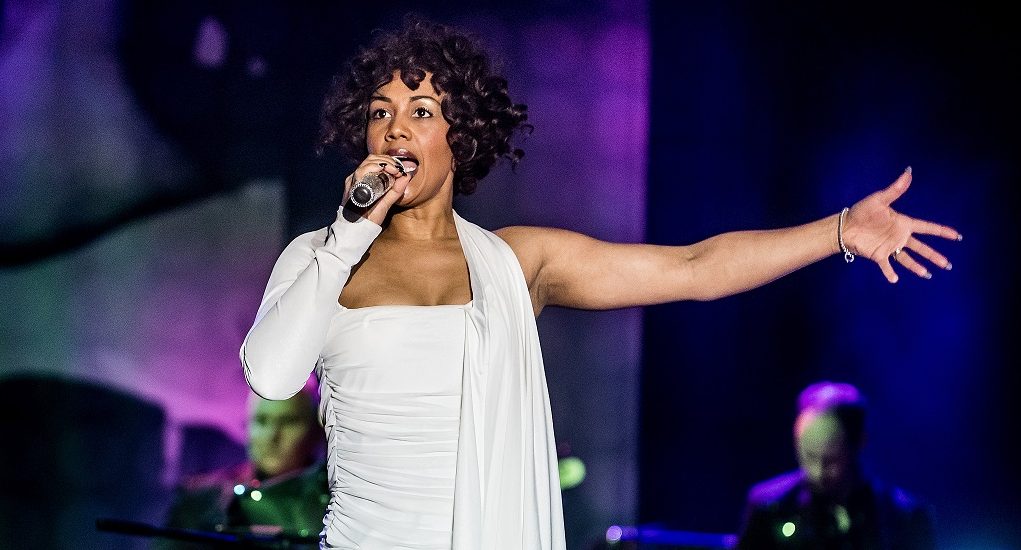 Whitney
Queen of the Night

The critically acclaimed international stage show Whitney – Queen of the Night is a celebration of the music and life of one of the greatest singers of our time and is heading to Glenrothes, Kilmarnock and Glasgow in September.

“Whitney Houston is one of the greatest singers of all time,” said star of the show Elesha Paul Moses, “and for me to lead this cast, singing these songs as part of this phenomenal show, is a dream come true.”

Whitney – Queen of the Night promises to be a spectacular show and, says Elesha, it’s all of Whitney’s hits, and more.

“There’s plenty of costume changes, the backing singers are dancing and we have a full band. There are snippets of information throughout the show that introduce many of the songs. The first set is quite easy going – the big hits, the
ballads and a few up-tempo songs – but when you get to the second half, that’s when it all kicks off! The last half an hour is pretty flat out, dancing and singing. Even if you’re not a Whitney fan you’ll still have a great evening.”

Elesha has been around the music business for many years but it has been a long road leading to the starring role in Whitney.

“It has, but it’s given me the experience and confidence to do whatever I want to do. We get scared of thinking about doing certain things because it’s too big or ‘I’d never get that,’ but if you don’t try you’ll never find out. I’m always up for trying new things, just putting myself out there a bit more.

“You’ve got to really go for these things because it’s not an option that’s going to drop in your lap. I tried it the other way, writing my own songs, working with other people, I’ve done showcase after showcase and tried to do it the TV way but that wasn’t to be. But it did give me a lot of experience of how it all runs. It can injure you, sometimes, but I’ve used all the
experiences that I’ve had to my advantage.

“I always used to sing when I was little. Mum says I would sing in the back of the car to Michael Jackson or Whitney Houston. It’s always been there but it wasn’t my first choice because I never thought I could get into this.

“At first I wanted to be a vet, because I love animals, but I wasn’t that academic at school – I was a little bit naughty!” she laughs. “I loved sports, so I wanted to be an athlete but you grow up, go out and you forget about these things. The one thing that stayed with me was singing. I carried on singing but I never thought I would be able to do this.”

When success did not come with her own material, Elesha spent time working as a tribute artist, including as Whitney Houston, before trying her hand on the TV talent shows The X Factor, where she reached Judges’ Houses in the 2010 series, and The Voice.

“I was asked to audition for The Voice, and I first went when I was pregnant with my daughter Kookie, who’s now six, but I realised the live shows would be on when I was due with her, so I had to back out. I auditioned again in 2013 as part of a duo (getting to the battle rounds in Team will.i.am), and again in 2014 (again getting to the battle rounds with Team
Tom).

“It gave me a little bit of exposure but nothing much. It was right pursuing what I wanted to do because you can easily get downhearted, and a lot of people do when they’ve been on these shows and they’re suddenly dropped.

“You have to be really thick skinned and I think that because I’d done other shows before it helped me a lot. But they are TV shows, at the end of the day, first and foremost for people to watch and to be entertained by. Whether or not the best one wins… that’s the nature of the show. Everyone has a talent in some way and they should carry on because sometimes it can work out.

“When I auditioned for the Whitney show I was four months pregnant but I thought I would do it anyway because, if I don’t do it, how am I ever going to get it? I might never know if I could get it. So, I did it and I got it!”

Not only that, Elesha is also starring the touring production of What’s Love Got To Do With It, a celebration of another of music’s greatest stars, Tina Turner.

“It’s great doing two shows and performing as two massive artists, absolutely amazing! Sometimes it’s a little bit confusing,” she laughs, “but I get there in the end.”

Elesha joined the cast of Whitney – Queen Of The Night in 2018, as understudy, and stepped up to the lead role in September. How did it feel to take the lead role for the first time?

“Oooh…” she giggles. “Well, it wasn’t scary. Because everyone gets to chat in the show, that was probably the worst bit for me, because I hate talking! At school I would never get up and read. ‘No, I can’t do it!’ Singing the songs wasn’t too bad because I’d already been doing Whitney and Tina before. Talking was probably the most nervy thing but, being on the stage, I just love that. There was more of a sense of excitement, a buzz, always your first one, oooh!

“It just got better and better and better. Every time I go on stage, I always try and perfect every song as much as I can. I still go back to listening to Whitney, trying to get more and more like her, what she does, her facial expressions. Even though she’s not as facially expressive as Tina, she does have these certain ways about her, with the hand on the mic,
she taps the mic, and other different things.”