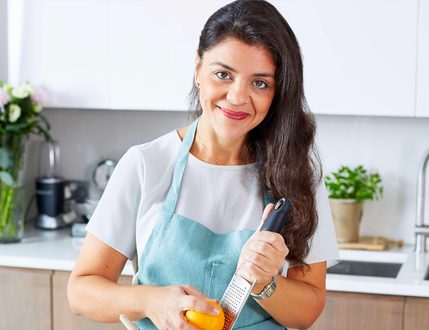 New Queen of Eastern cooking has the Spiegeltent salivating

Part of the World on A Plate series, which has been created with author and food and drink entrepreneur Nikki Welch, the food strand at this year’s Book Festival has an irresistible series of events with internationally-renowned chefs who’ve written down their culinary secrets so that we can reproduce them at home; it also includes a range of afternoon teas and tastings.

We’re lucky that Ghayour is with us, as she had cancelled all of her other engagements due to two herniated discs and she noticeably struggles in negotiating the step onto the stage.

With a hugely successful London supper club and a series of bestselling, accessible recipe books including Persiana, Sirocco, and Feasts under her belt, British-Iranian chef and food writer Sabrina Ghayour is fast becoming a new foodie superstar.

Her new book Bazaar makes the magic of Middle Eastern veggie cooking easy for anyone to achieve – an interesting statement coming from a self-confessed ‘flag-waving carnivore.’ She says of Bazaar that she has written it for meat-eaters who need more help.

We learn how she has come to cooking, despite her mother being a hopeless cook – which she explains is unusual for a woman in her culture.  It was her grandmother’s sister, who was “quite the cook” who shared some of her knowledge.

Ghayour’s recipes are simple, flavourful, easy and accessible.  She uses the same herbs and spices in her recipes and she says she’ll never have you buying a jar of something that you then find out has only ever been used once when you finally get to clear out your cupboards.

This enthusiastic, ‘new queen of Eastern cooking’ will have you salivating over her sumptuously simple recipes and she has made me want to search out the dish that would be her last supper, Ghormeh Sabzi, a Persian Herb Stew made with fenugreek. I might, however, seek out a restaurant that serves this rather than attempting it myself, as an Iranian lady sitting at my table, says the herb smell will linger in your hair and kitchen for weeks after the event.