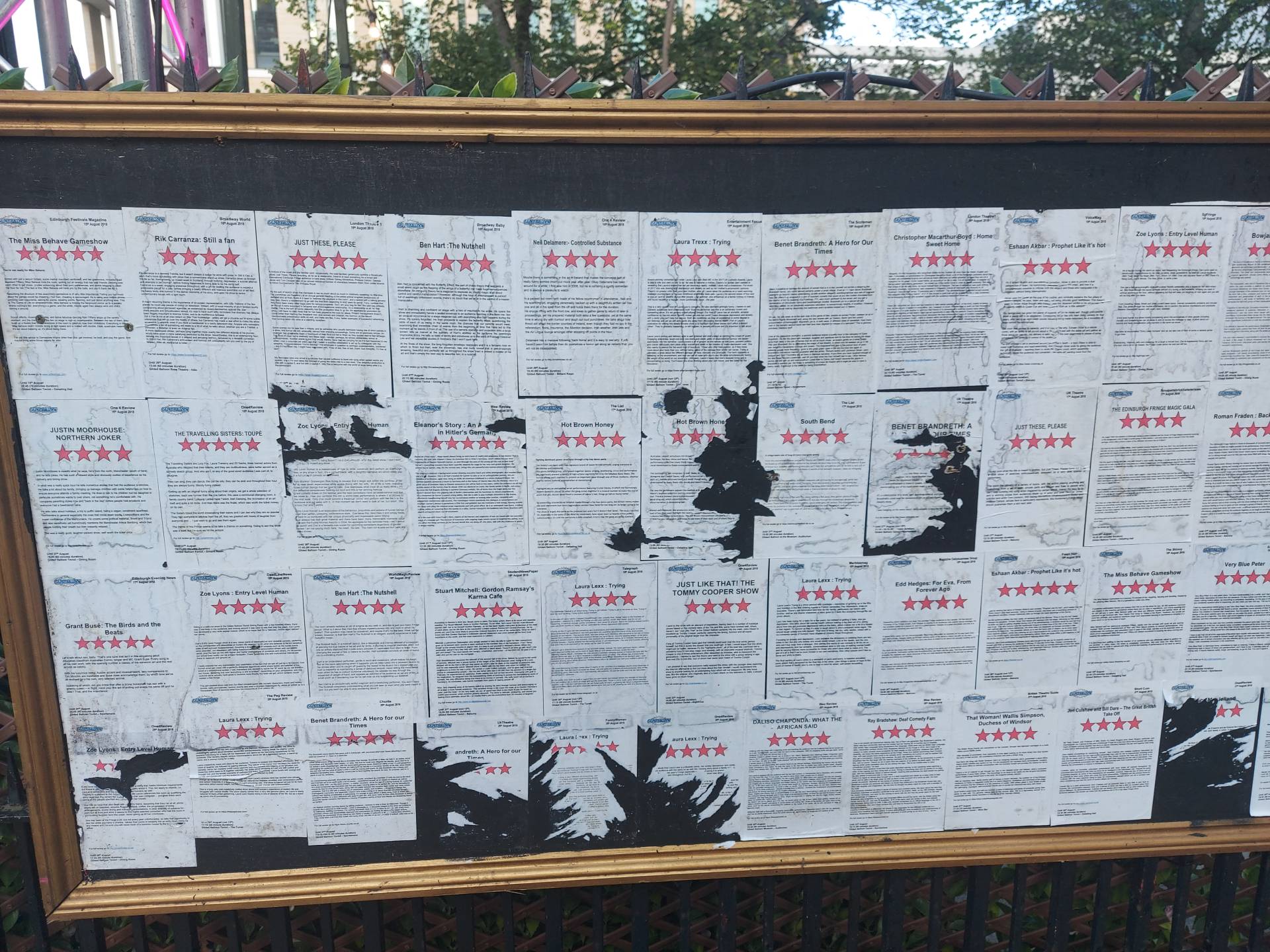 Apps, scabs and Sadowitz - a look back at this year's Fringe

As Fringe 2022 draws to a close, our editor Robert Peacock looks back on some of its talking points and controversies. What are we to make of the Fringe’s full return to action?

When the Fringe had to be cancelled in 2020, there was high-minded talk of the opportunity to step back, reset, make it a more equitable, enjoyable Fringe for everyone. I expressed my own hopes here.

That hasn’t really happened. The Fringe has reverted to type. Choruses of ‘we’re just glad to be back’ are loudly heard, but largely from the Fringe’s ‘haves’. From the bottom of the heap, the picture looks largely the same as pre-COVID – very hard, maybe even worse, with audiences down and costs up.

Recovery is a long-term process. Five years is the Fringe Society’s timescale. But what does ‘recovery’ represent? After year one, it feels like it means ‘return to the old status quo’.

It’s all done and dusted now, the punchline to 1000 stand-up jokes, but let’s pause to record that its absence did have an impact, and disproportionately so on free shows. The Fringe Society have promised its return in 2023 and wish to draw a line under it. The anger of some acts and promoters at the AGM suggests they’re not ready to draw that line just yet. That hole shot in the Fringe Society’s foot may not heal quickly.

Another heat-not-light generating topic now done to death. Debates around ‘censorship’ and ‘free speech’ at the Fringe are nothing new. In this case, the specifics matter less than how it landed beyond the Fringe bubble. The changed, small c conservative character of the reputedly no-holds-barred Fringe is now a matter of public record, as I explore further here.

The rule of three also seems to apply to Fringe controversies and strikesbrought up the hat-trick. Trains and trash. Too few of one, too much of the other. British public transport being what it is, the former was cast off with barely a shrug. The latter left egg (and other rotting foodstuffs) on the faces of the city’s grandees as waste blew through the city’s closes and piled high around its landmarks – not the picture postcard tourist playground of the brochures.

While some Fringe performers took matters into their own hands, others yelled scab and organised fundraisers in solidarity with the strikers. No doubt the strike hit city bosses where it was meant to in their showcase month. What happens long-term, we don’t know. The cost of living is not going to fix itself, and certainly not by the time August 2023 rolls round. Next year’s Fringe will be played out against an even more financially desperate backdrop for many city workers and residents.

The institution still embodies the ideals of what the Fringe should be and a strong Fringe Society is the best guarantor we have against a Fringe totally dominated by commercial interests. It rather stuck in the craw when one representative of those interests, William Burdett-Coutts, used his Assembly Gala opening speech to stage what sounded like a power grab, although other venue bosses demurred.

There is no doubt, though, that the Fringe Society is a beleaguered organisation. While it cannot be tasked with solving every problem the Fringe faces, some of which, like property prices, will be eternally out of their power, it does need to recover its sense of purpose and ability to deliver, quickly. Those of us who value the Fringe’s founding ethos should help it to do so, not by withholding criticism, but by making sure that criticism is constructive and forward-thinking.

Not everyone is back

Numbers are down, inevitably. According to figures at the Fringe’s AGM we’re at around 80% of 2019 figures. More interesting are the quarters of the Fringe where that diminution is happening. A number of Free Fringe performers of my acquaintance decided it just wasn’t worth it, as apparently did a number of venues (see below). And that is predictable. A smaller Fringe is likely to shed its most precarious participants first and that is a worry.

Sweet, PQA, Venue 13, Bedlam, Quaker Meeting House… a host of small to mid range venues didn’t return for 2022. Reasons for their disappearance are varied, but let’s hope some of them resurface in some form as they were each of them in their own way a colourful part of the Fringe jigsaw. A Fringe dominated by the large venues is not a Fringe at all, although a shout-out to those mid-tier venues that continue to thrive including Greenside, theSpaceUK, Zoo, Paradise Green and C.

The Stand bade farewell to its gun-toting cowboy, a Fringe icon in his own right, but now destined for an afterlife in a different comedy club. Goodbye old friend, but hello to his cheeky little replacement. 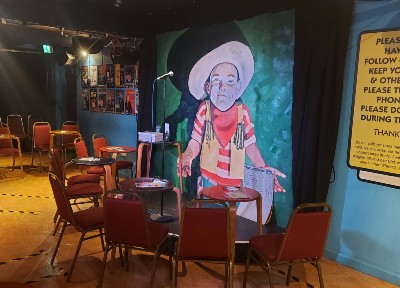 A glance through the programme and press releases showed that the one-week runs which have been standard at places like theSpace are becoming more prevalent elsewhere. The Fringe Guru number crunchers report that only 53% of performance runs are now for the full three weeks, compared to 60% in 2016. The one week numbers are up to 29% from 24% over the same period. It’s not a sea change, but still a significant one, and anecdotally, many performers seem to be reporting that shorter runs have been much better for their mental health and bank balance.

Something would definitely be lost if the all-in-it-together three week marathon became a tag team succession of performer in-and-outs. Word of mouth would be harder to build, opportunities to see the big shows would be reduced, and the distinctive atmosphere of the individual weeks would change. Whether that loss is a worthwhile trade-off and the trend continues, only time will tell.

A few years ago, narratives about bisexuality were the trending comedy topic. This year, in one of the Fringe’s least surprising revelations, many comics were talking of their ADHD diagnoses, including Ted Hill, Marjolein Robertson, Josie Long, Harriet Dyer, Rosco McLelland and many more. In theatre, companies continued to highlight inequalities and challenge traditional narratives around gender and identity, often as part of a broader-ranging storyline.

COVID and the effects of lockdown were often referenced, but rarely dwelt on. Few shows that I saw addressed the other crises looming on all sides. Perhaps it’s just too scary to contemplate. But that raises another thought: In difficult times, it’s sometimes assumed that escapism rules. That’s not borne out here. Introspection is still the way of the Fringe.

A lot of the Fringe imagines itself radical because it is issues-based, often tilting at windmills in a culture war it has largely won. And there is always a fare share of actual agitators of the old school variety in the PBH back rooms – left wing poets and so on.

But as a whole, it remains a scared and unadventurous place, which easily rests on established ways of doing things. In his book, Freeing The Fringe, Peter Buckley Hill talks of the reluctance of many performers to get on board with the free model in the early days – the one true radical shift that has happened in my years of Fringe-going. And that unadventurousness continues. How easily the Fringe returned to normal whinges – you have to buy PR, there’s not enough media coverage, what do stars count for anyway? Few seem interested in creating new centres of power or different ways of doing things. One of the exceptions is Sian Davies’ Best In Class initiative, which through profit-shares and bursaries has helped working-class comedians get a foothold on the Fringe ladder. It was launched in 2018 (read our interview here) and this year was acknowledged by the Panel Prize at the Comedy Awards. Fully deserved, but this can’t just be a token – a pat on the head from the industry, before being ushered back out the door. There needs to be more radical change. We are certainly going to look at how we approach covering the Fringe in the future and I encourage people to do the same in their spheres of influence.

A fair retrospective of 2022 also has to include some pedantry. This may be the first full-scale Fringe for three years, but activity never completely stopped. The enterprising Nathan Cassidy was the entire 2020 Fringe (though the online performers we reviewed may beg to differ). Then there was last year’s slight return to action.

That semi-Fringe felt different. Only the hardiest were here. The chaos was much reduced. I met a local performer with an unpromising sounding musical comedy show. When I turned up to see it, expecting to be the only audience member, they were queueing round the block and I couldn’t get in. Non-big names selling out just because punters wanted to support them and get back out to shows again. It was lovely.

That sense of a different future has been swamped by this year’s return. The Fringe is back to its old self, for good and for bad.