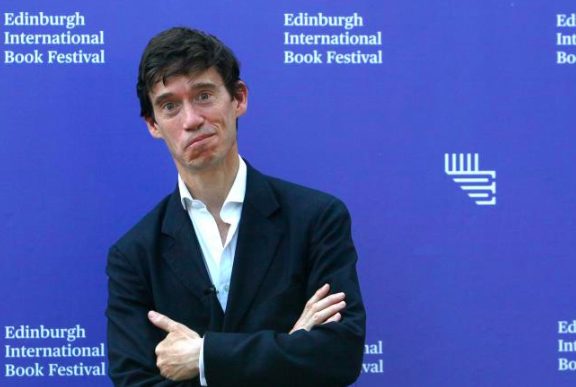 It is no real surprise that the house is full for today’s late entry to the Book Festival programme for in the recent Conservative Leadership race Rory Stewart proved to be an articulate, engaging candidate with a unique approach to campaigning.

He has written a number of books and so is more than worthy of his place at the Book Festival table but it is his politics which has really drawn the capacity crowd today. Charlotte Higgins (Chief Culture Writer at The Guardian) starts by asking Stewart about his walks. He took one earlier today in Glasgow, visiting homeless people, believing this to be the best way to really get to the heart of problems. Rather than people making big name statements such as ‘Poverty’ and ‘Austerity’ in order to blame something we need to actually find out what the real story is. Only then can we truly come up with a solution rather than just spouting out statistics and headlines.

And this is just part of what makes Rory Stewart different from other politicians. He still believes firmly in conservatism and in the reasons he came to the party and to politics but he is candid when he says that being in the centre used to be more like a bell curve and it was where most people sat. Now he believes the bell curve has become a ‘U’ and the centre has become a far lonelier place. This leads neatly onto a discussion of nationalism, almost impossible to avoid in Scotland, and Stewart is firmly against it. “It doesn’t work”, he argues. It is far too simplistic an approach to assume that by cutting something away life becomes easier. He argues that it is the complexity of Britain which makes it so great – without our rivalries and differences we would be boring.

This is the MP for Penrith and Border’s first public appearance since the leadership race and Stewart is questioned about how he felt about it. He tells us that Johnson was already known by 90% of the population when he stood as a candidate and Stewart reasons that against that people don’t want to hear a relative unknown ask for the fourth time how we battle addiction problems in the UK. Instead they want a celebrity who can come up with the most fantastical ideals. The problem is they are unrealistic and he brands many of the world’s leaders as dealing with “fairy tales” rather than facts.

The hour is over all too soon, everything Stewart has to say inducing nods of assent and murmurs of agreement amongst the audience. He is a breath of fresh air in politics and says he will consider running for leader again although accepts that it may not be the “most useful contribution he can make” and that is ultimately the path he will choose.