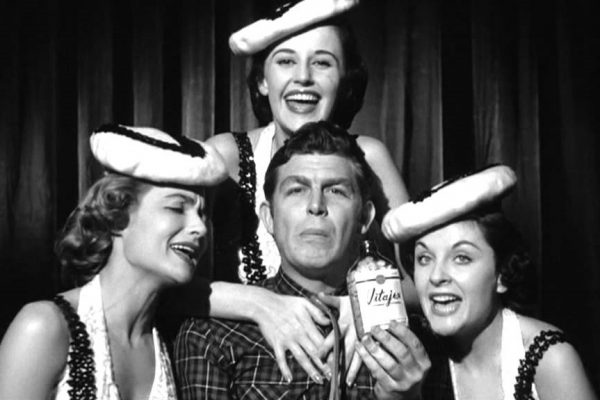 A Face in the Crowd

Ferocious satire on the dangers of celebrity of which Trump should take note.

Ferocious satire on the dangers of celebrity of which Trump should take note.

In 1954 Kazan and screenwriter Budd Schulberg collaborated on the classic On the Waterfront. Three years later they made the less famous but equally startling A Face in the Crowd. At the time it was seen as a rather far-fetched satire on the dangers of TV and its ability to influence millions of viewers. But it’s really a satire on the dangers of fame and celebrity. Schulberg’s writing is smart and very funny and 60 years after the movie was made it looks not so much far-fetched as utterly prescient.

Larry “Lonesome” Rhodes (Andy Griffith) is a kind of Jerry Lee Lewis figure (it was thought the role was based on actor and humourist Will Rogers). Lonesome sings, he is full of down-home wisdom, says the unsayable and people love him. He’s discovered by Marcia (Patricia Neal) for her Arkansas radio spot and the next thing he’s on coast-to-coast. TV and its advertisers come running to exploit his popularity. He becomes the face of Vitajex energy pills (a cross between Berroca and Viagra).

Inevitably the “good ol’ country boy” persona that is so endearing is corrupted and changed by fame, money, power and the ratings. As John Updike once wrote, “Celebrity is a mask that eats away at the face.”  Maybe Lonesome was always a nasty piece of goods under the surface.

Lonesome’s buddy (Anthony Franciosa) becomes his agent and Marcia is his sometime lover and business partner who is determined to tone down the crazy notions he spouts, especially when they don’t please the TV network or the sponsors. Lonesome’s rabid egomania and rampant narcissism are on the chronic side of the spectrum. Griffith, who started in stand-up and ironically had a huge TV career in the 1960s, gives a ferociously sinister performance. The actor said the movie took three months to film and four months from which to recover.

Lonesome proposes marriage to Marcia but before you can say “honeymoon suite” he’s up and married a teenage cheerleader (Lee Remick’s debut) who transitions from baton twirler to Khloe Kardashian-style trophy wife complete with matching chihuahuas. How things haven’t changed.

When the film suggests that Lonesome Rhodes has the power to bait politicians the plot gets claggy and preachy. But then Lonesome gets his just desserts, big time. The movie makes for an interesting compare-and-contrast exercise with Paddy Chayefsky’s 1976 movie Network.

However, for today’s audiences the film’s second half will stiffen hairs on the backs of necks. The messages in the film are so reflective of Trumpland this must surely be one of the reasons for Criterion rereleasing it now.