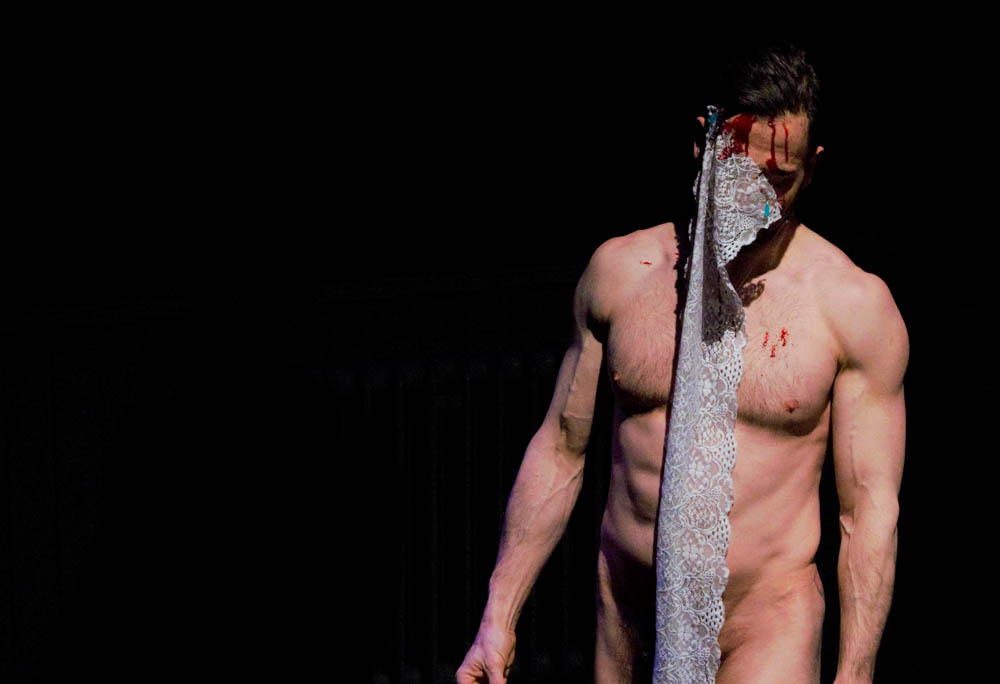 Cabaret night is a delight for the eyes, but sometimes difficult to follow.

Summerhall always provides an eclectic mix of art forms. Never more so than with performance cabaret night Anatomy and this, their 16th event in five years.

Anatomy 16: The Return of The Frost Kid Gang, is a strange evening set within the uniquely morbid anatomy lecture theatre of the old vet school. The audience are sitting on old wooden tiered lecture seats, in a semi-circle focused around the centre of the hall, where once animals would be diced up and examined.

Much like the variety of different animals that were once gutted for display, Anatomy 16 is a cabaret of varying artistic forms, each one as chilling and visually stunning as the last – or just plain weird.

Starting off is Red, Red, Red by Stephanie Black and Daniel Kutinsky whose sound-based performance wraps electric sounds with violent red sashes. The choreographed dance, waving blood-red ribbons hanging from a plank, is in time to electronic beats and symbolises a white Christmas, or maybe a bloody one.

Some acts are comical, such as The Lustration of Vacuumous whereby Lewis Sherlock beats a rug for ten minutes and passes out, only to be met by Vacuumous, a vacuum cleaner goddess. A stranger act is Xelís de Toro, whose Til the Cows Come Home portrays a man uttering the words “till the cows come home” repeatedly until he is found screaming at the floor. Then, the sound of a cow bell resounds and his sanity is restored – the cows have come home.

Junk Exorcism by Yol is an even weirder foray into the classic Christmas number one single. Yol smashes Christmas toys and runs a violin bow up and down tin boxes whilst screaming the words “How does it feel to be a Christmas jumper”, “festive moments”, and “you never know what to get them”.

Perhaps most striking of all is Defence Wounds by Philip Bedwell. A naked Bedwell stands upon coals, with a simple lace sash running from his forehead to his feet. As the dance continues, Bedwell removes large hypodermic needles from his forehead and blood pours to the ground.

The over-arching theme is difficult to diagnose as each piece is wildly different from each other. But the visual nature of the pieces is a delight for the eyes. It just took the mind a bit longer to catch up.

Ultimately, this is a cabaret of dark arts and humour. Applause must be given to the sheer surrealism of the night and how well the show fits the stage. However, sometimes performances go on too long, and even the surreal nature is often lost.

Anatomy will be returning next year at the Traverse Theatre for a first time “Best of Anatomy” feature show.