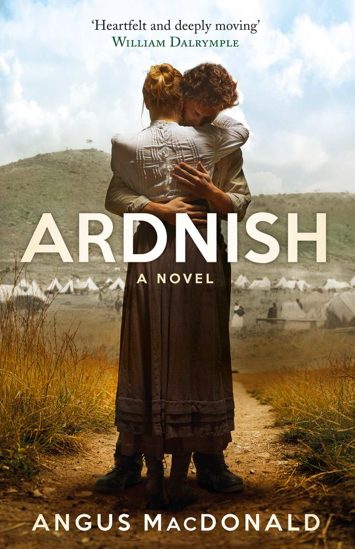 War veteran reconciles with the choices of his past

The year is 1944 and the Second World War continues to rage on. In a remote village in the Scottish Highlands, an old veteran, Donald John Gillies, reflects on this life. The novel takes the form of reflections when Gillies was fighting for the British Army in the Boer War. Far away from home, in a stange and wild country, Gillies formed relationships that lasted for years, and were stronger than the test of time. Readers mull over the question of the power of these relationships to change Gillies’ life, but will they also change his family for ever?

Ardnish is the first book of author Angus MacDonald’s trilogy of the same name. As the narrative alternates between past and present, the reader is presented with snapshots of Gillies’ wartime efforts. As with any war in the 20th century, the lives of soldiers is dreary and dangerous. Supplies are scant, the end is not in sight, and it requires tremendous strength of moral fibre to survive. Gillies demonstrates this in spades. But a chance encounter with a young woman Linde, makes him question his ties with home.

This books requires some prior knowledge of the Boer War. It can be hard going for readers who don’t have a bearing, as the action does not allow for enough time to set up the wartime scenes. It is also much later in the book that the reader warms up to Gillies; until then there is nothing particularly redeeming about his character. As a soldier, he looks upon the ‘other’ with disdain. He acts like any other young soldier would, and simply his missing home does not make him special.

This is perhaps an interesting read for those interested in the horrors of wars caused by the British empire. Reading up on the war afterward, its long term damage is clear to see. But even then, the novel shies away from the question of morality. Instead, it only scratches the surface of the meaning of a relationship between a soldier and a local. In some ways, more treatment is needed. But perhaps this will be dealt with in the later novels.