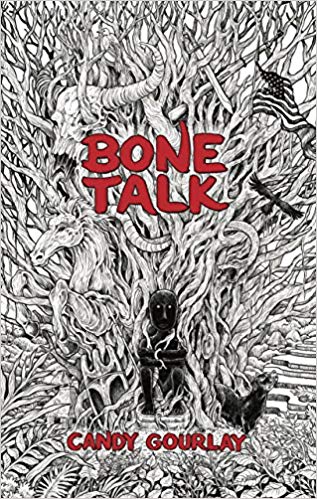 Candy Gourlay‘s latest children’s novel, Bone Talk, has already made some waves. A Guardian book of the month for August, it takes young readers to a setting they are unlikely ever to have visited – a remote head-hunting tribe in the late nineteenth-century Philippines.

By tapping into common sensibilities and with outstanding writing, Gourlay creates a relatable character in the Bontok boy hero Samkad, who wants nothing more than to become a man and bring home the head of a Mangili, the enemy tribe. Young readers will easily relate to Samkad’s overwhelming desire to prove himself, to his fear of failure, and his loyalty to his community. They will recognise his irritation with younger children and resentment of chores, and will feel empowered by his ability to make a difference when it truly matters.

On the surface, it might appear to be a book about boys, men, and war, but Little Luki is a natural rebel who wants to be taken seriously as a fighter. Not content with traditional expectations of her, she defies the elders – and many of the plot twists in Bone Talk rely on her taking the initiative, a masterstroke of storytelling that allows a crucial female perspective.

Bone Talk is a multi-faceted tale of petty warfare, coming-of-age milestones, and family dynamics. As it is set during the American invasion of the Phillippines, it hints at a David-and-Goliath-tale of colonialism and subsequent oppression.Samkad, Little Luki, and their families must survive and somehow protect the world of ritual and community that they inhabit. In short, the book tackles big themes, but avoids simple stereotyping and glib answers.