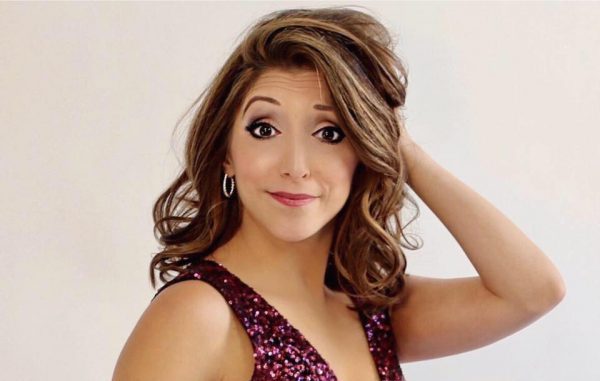 One of Bianco’s favourite musical gags is her ‘unlikely interpretations’: taking a popular song and singing it via the voice of a very unexpected vocalist. Tonight, it’s Donna Summer’s Hot Stuff… as sung by Julie Andrews. The audience are delighted at Bianco’s skill. Another particularly impressive moment is in her rendition of Shallow from the most recent iteration of A Star is Born. Tonight, though, rather than Lady Gaga, it is Barbra Streisand and Judy Garland who ‘perform’ the hit and Bianco’s quick shifts between the two voices, sometimes in the space of a single line, is dazzling. Other highlights include an audience-selected TV theme tune as sung by a randomised diva (improvised perfectly by the fantastic on-stage band) and an updated version of Bianco’s famous quick-fire impression roulette of Total Eclipse of the Heart.

However, as well as singing impersonations, Bianco is equally skilled in her spoken impressions. Tonight we are joined by actresses Katherine Parkinson, Kelly Macdonald, and Keira Knightley (among others) and Bianco’s mastery of these British accents gives us a real kick. To top it off, the singer is also able to perform without the impression gimmick. Her own natural singing voice, as showcased in two or three songs, is powerful and gorgeous. In fact, she’s so note-perfect that it’s hard to fathom how she’s performing these mega-notes and soaring songs so excellently night after night.

First Impressions is a guaranteed winner. Even if audience members don’t know each and every singer Bianco impersonates, the sheer versatility and vocal dexterity of the star create a thrilling night. She isn’t just a superstar – she’s hundreds of them!