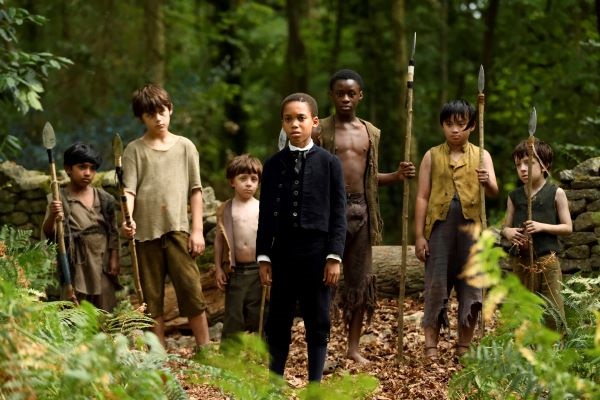 Clever take on the spiritual prequels for Peter Pan and Alice in Wonderland runs out of steam, bogged down with melodrama

Taking a brave decision to manifest a spiritual prequel for two of literature’s pre-eminent children’s tales, Come Away has a steady nerve to offer an origin (of sorts) to both Peter Pan and Alice in the Wonderland. Not strictly in character, instead, Marissa Kate Goodhill’s script modifies these two into the Littletons, two children existing outwith the pages of their stories. Together, the young Alice and Peter embark on a journey to salvage their parents’ happiness following the loss of their elder brother. Encountering cut-throats, women of nobility, and a few tick-tocking scaly fiends, Come Away underpins family melodrama with the tales children have used for decades to understand the world.

Embracing its roots, Come Away doesn’t feel it necessary to water the source material. It challenges the perceptions and impact of grief in children, and the societal pressures of gender expectations. And as much as the star-power of the film caters to the likes of Angelina Jolie, David Oyelowo or Michael Caine – the absolute mirthful joy and glee of the film come from its young performers Keira Chansa and Jordan A. Nash. The two together draw out such energy and raw emotion from the story. Brenda Chapman‘s direction allows for this pair to play precisely what the film requires – children. Not kid geniuses or saviours, but two kids who want nothing more than to protect their parents and fall victim to the pains of reality as they face the choice of reality or imagination.

And while this all sounds marvellous, Chapman is grasping at wet soap. Many of the film’s potent points bounce around confusingly, attempting to dip in and out of reality and often stumble on the folded pages of the fairy tales they wish to emulate. Pacing is the principal issue. Where much of the beginning and conclusion of the film ties together neatly and imposes a sense of atmosphere, the middle portion can’t quite match the same level of drama or magic. There’s a sneaky feeling that following the setup, the filmmakers are too eager to get into the scenes involving pirates, Red Queens or fantasies and in their decision to crush in as many nods or hints as possible, they slow the film’s pacing.

And with all of this fantastical metaphorical imagery, the film’s absence of colour makes for a distraction. Often there’s a golden amber to much of Come Away, save for striking moments reserved for the elaborate and magnificent costumes following Alice’s initial trip into Wonderland thanks to her mother’s ‘secret potion’. Aesthetically, Jules O’Loughlin‘s cinematography is safe, refraining from experimenting or warping the film to enhance the fantastical nature.

Towards the epilogue, Come Away steps on the fantasy pedal a little, and it’s precisely the infusion needed to tie the film together. Picking imagination, Peter and Alice’s journeys veer into place as the pinnacle of British children’s literature and make for a refreshing change where the film tries to marry wonder and rationality together, rather than accepting one outright. The constraints placed on the young Alice, to become a prim and proper woman follow a natural path for her life leading to Wonderland, and Peter’s determination to spend his life foiling the actions of his uncle, stealing the treasure he cons out of people, serves the boy who never grew up well.

At its heart, Come Away has tremendous enthusiasm and adoration for the timeless place these stories hold, and deserves recognition for binding their themes and messages into a unique twist on their origins. Because it uses fantastical imagery sparingly however, Chapman’s film loses focus in the middle as it sandwiches itself between a melodramatic family piece and a contemporary flair for the boy who never grew up, and the girl who appreciated madness.

Available in cinemas and On-demand from Fri 18 Dec 2020