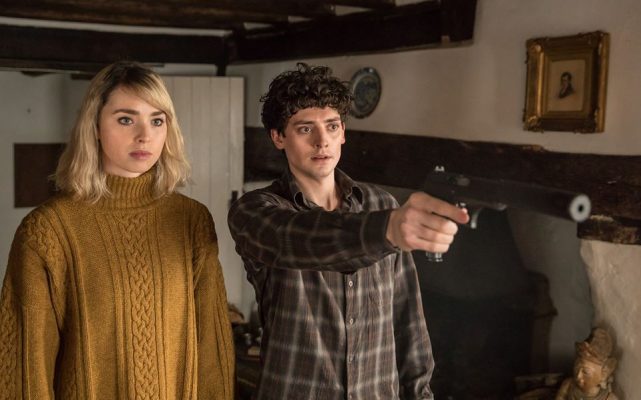 Dead in a Week: Or Your Money Back

Ridiculous comedy about assassins and suicide

In Bruges meets Bake Off in Tom Edmunds’ new comedy Dead in a Week: Or Your Money Back.  The premise begins with William (Aneurin Barnard), a sensitive writer whose numerous unsuccessful suicide attempts drive him to hire Leslie (Tom Wilkinson), a past-his-best assassin on the brink of unwanted retirement.

It’s a storyline posed for dark comedy, but unfortunately it doesn’t deliver to its full potential.  This is in part due to the hammy acting, particularly on the part of Barnard and Nigel Lindsay, who plays an obnoxious publishing magnate.  Jokes that are conceivably funny fall flat without the panache of slick comic timing, and this makes the dialogue seems overly crafted and straining for laughs.

Additionally, the sting of black humour is blunted by the conventional storyline.  Without spoiling too much, a man who finds no meaning in life is turned around in a heartbeat by an underdeveloped romance with his beautiful editor (Freya Mavor).  That said, the ironic ending does give the film the defibrillating shock it needs.

Although this film falls a little flat, it is just a bit of fun.  There are gently amusing moments throughout, and for those who aren’t tired of the comic juxtaposition of twee and deadly, Leslie’s passion for budgerigars and his wife’s knack for being violent and sweet at the same time might bring out a few chuckles.

However, this formula has been done and done again. It may have worked wonders in small town murder mystery Hot Fuzz, but films such as Quartet, Going in Style and the forthcoming and relentlessly advertised Uncle Drew have bled it dry.

If you are looking for an easy comedy to sit back and switch off with, Dead in a Week: Or Your Money Back could be just right. But you might get more out of the plethora of more challenging and more interesting films at this year’s Edinburgh Film Festival.