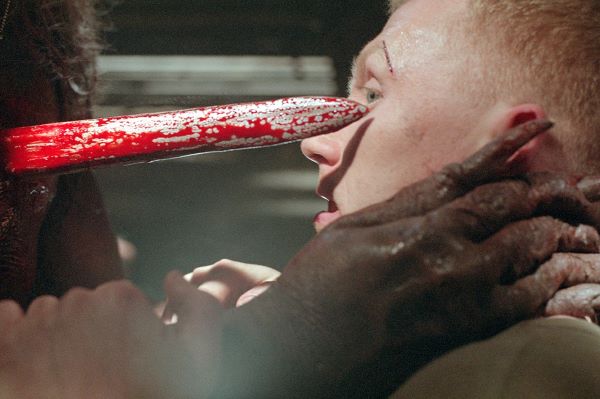 Surprisingly gory and fang-bearing werewolf flick gets a welcome rerelease

Werewolves quite often get the backend of the horror genre, finding themselves with a spurt of genre-defining classics and John Landis specialities and then relegated to the schlock franchises, spin-offs, and adaptations. A transgression of bullish masculinity and reversion into animalistic nature, when handled with a snarl and deft hand, they can make for a smasher of a horror film and easily carry the more action-orientated offerings of the genre. Dog Soldiers stalks across the expectations one would have, taking a few unexpected turns and offering solid performances.

A training exercise in the highlands; isolated from communications, supplies, and civilisation seems like the unlikeliest of places for everything to go wrong, right? Remastered and returning to darkening moonlit nights once more is an underappreciated piece of British lycanthropic cinema with Neil Marshall’s 2002 debut. Referring to both the obvious creatures, and the dog-tagged protagonists, Marshall’s film digs itself into the grime, mud, and blood of the highlands as a squadron of lads find themselves battening down for one last stand-off against an advancing werewolf assault. Sound ridiculous? It is, and Dog Soldiers exploits every moment it creates and laps up all of the ludicrous turns it churns out.

Dog Soldiers does itself no favours though in the opening moments, an offset taster of events to follow and an early spoiler for the design of the creatures. Pay no heed – if anything fast-forwards past the initial five minutes, as the following scene feels closer to a structured opening, introducing a group of special forces, led by an ever-scowling Liam Cunningham, coming to blows with his private, played by Kevin McKidd. All the while, something powerful and primal lurks in the background.

Here’s the rub, Marshall’s dedication to everything the film does well pays off, transforming a potential run-of-the-mill bargain exploitation film into an action-fuelled and tense British horror and a real gem for shape-shifting fans of the horror world.

Guts, gore, guns, and guys – the film embrace its key strengths, which chiefly lie within the intense performances from Sean Pertwee, Kevin McKidd, and Liam Cunningham. The three lead an aggressive front encompassing the film’s stance on the armed and special forces and bold machismo. A particular standout is Pertwee’s shockingly visceral take on Sgt. Harry Wells, who on paper plays the expected quasi-father figure military leader, but carries such gusto and charm in the role that Pertwee aids many of the otherwise shakily written scenes.

Onscreen, Pertwee, McKidd and Emma Cleasby, the exposition vehicle for the origin of the monster, have a comprehensive back and forth, each of the trio drawing something out of the other, whether this is Pertwee’s cheeky nature, McKidd’s sense of bravado, or Cleasby’s necessity as the voice of reason.

Equally as investible is the camaraderie the men share in the initial training sequences, more of which could have benefitted the film, to not only solidify relationships but cause bigger impacts when the heads begin to roll – and boy, do they roll. Those seeking gallons of fake blood and prosthetics will find themselves satiated with Dog Soldiers’ creative chops for the theatrics. And while the creatures themselves are suffering from hair of the dog, the general makeup aesthetic still lives up to decent standards nearly 20 years on.

Unable to shake a B-movie aura, Dog Soldiers far exceeds first looks, serving up a slice of fang-bearing menace. The remaster emphasises the colour palette, particularly the blues and makes for clarity, even in the film’s darker lit moments. Embrace the animal instincts, hunker down and this spooky season trade out the ghouls, goblins and politicians for a twisted take on man’s best friend.