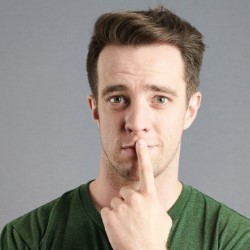 In his debut solo Fringe show, Kiwi Eli Matthewson presents The Year of Magical F*cking, a humorous sex-positive hour about Grindr hook-ups, falling in love and growing up in the shadow of religion and jock culture.

With an instantly likeable presence, Matthewson tells the audience he was a late bloomer and recalls long dry spells that cause him mock the central conceit of the Josh Hartnett movie 40 Days And 40 Nights (where the straight protagonist must abstain from sex for a little over a month). The comic could easily manage 40 days without sex, even in a relationship. Growing up in New Zealand, he was exposed to a religious rhetoric that regularly blames homosexuality on natural disasters. This story provides a hilarious running gag about causing earthquakes by fucking.

The show is funny and filthy with anecdotes about the dangers of being on Grindr while driving, terrible sex education lessons and a cracking Shania Twain impression. The crowd are regularly in stitches and there are times where Matthewson’s humour could do with being pushed a little further, it’s clear the audience can take it.

After years of hot hook-ups, with a high success rate with Lord of the Rings tourists, Matthewson has found love with his very own Plane Bae Sam. After spending over 40 days apart at the Fringe the audience are advised to look out for news of a large quake when the pair reunite in September…

There are glimpses of pure brilliance in the comedian’s show – he missed his calling as an X-Factor contestant, with his ability to take any song and reproduce it in that very specific talent show style, and the finale (which imagines Disney’s Frozen sequel as a lesbian love story) is inspired. The Year of Magical F*cking is enjoyable hour of comedy that leaves you smiling and wanting more and could be truly excellent show with minor tweaks.