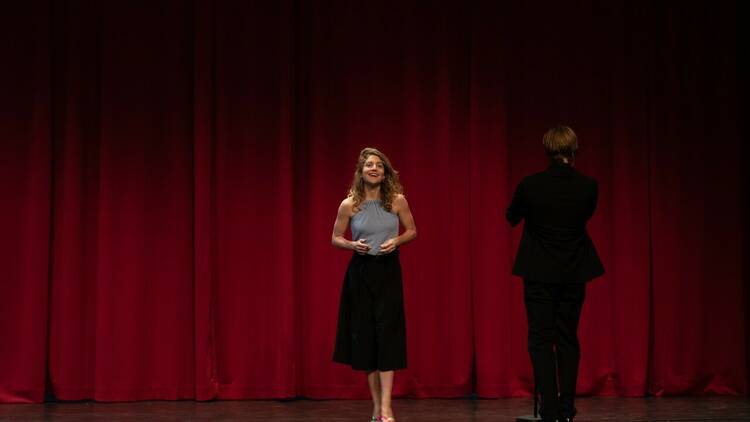 Every word was once an animal

Powerful philosophical theatre - or is it?

A musing about the nature of theatre

Ontroerend Goed have a track record of making shows that blow your mind. Every word was once an animal is no exception. They make theatre that tussles with the nature of what theatre is. You won’t necessarily get a story with a clear narrative arc. But if you can cope with that, seek this out and wallow in it.

A red curtain is closed across the full width of the stage. A microphone stand is placed in front of it, off centre. Karolien walks on stage to the mic. She’s not opening the show, she explains. In good time, someone else will walk onto the stage, take up a place at the microphone and start the show. She’s just letting us know a little bit in advance about who that’s going to be. She leaves the stage. If that all sounds a bit meta, this might not be the show for you.

The show – if indeed, it’s started – unfolds for the next hour. Various actors appear and introduce themselves with names that may or may not be real. There’s a strand of the story about a letter that a school girl, Emma, wrote to Ontroerend Goed, asking them what this show was about. There’s a mini model of the theatre set. The fabulous curtain scene promised by Karolien De Bleser is indeed a fabulous curtain scene. Bastiaan Vandendriessche has a lovely sequence featuring the show’s title. And there’s a whole series of projections of the views from different living room windows, relayed onto a (not red) curtain in silence.

If you’re going to go see it, don’t read the next bit. But you could interpret all of this as a musing about the nature of theatre – the willing conspiracy between us and the actors that sees the audience suspend disbelief from the moment a performance starts. Or you could interpret it as a reflection on the way the world turned on its head at the start of 2020 when the first cases of covid were discovered and we were all sent home for several months. Or you could interpret it as a reflection of the fact that the world around us makes no sense at all and the more you think you know about it, the more it continues to confound you. Or maybe none of these speculations contain the slightest grain of truth.

What is certain however, is this production will give you plenty to think about. If you’re guzzling multiple shows in a day, this one deserves a bit of airtime afterwards to let you ponder.