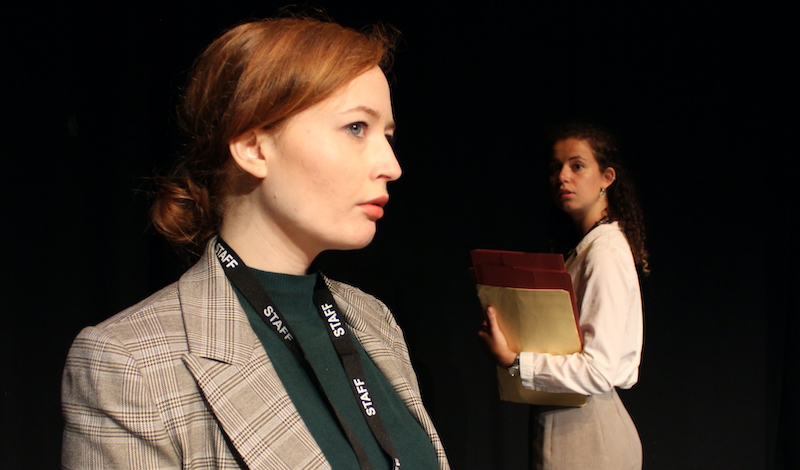 A slick, tense and intelligent crime thriller that might just leave you wanting to get one up on your manipulative boss

Nathaniel Brimmer-Beller’s Fear of Roses is a play for anyone who feels overworked and underappreciated by their boss, although perhaps you wouldn’t go as far as this to teach them a lesson. The fourth original Fringe show from Black Bat Productions is a slick, polished and mostly entertaining comedic crime thriller featuring three strong lead performances and a healthy dose of clever writing.

Set during the pandemic, Fear of Roses is a small-scale but intricate story of power, ambition and what it takes to be recognised for your efforts. If you ever needed more evidence that banks are cut-throat places, this sub-one hour play will give you everything you need. The power dynamics between the all-female cast members can change in the blink of an eye, and as such the relatively short story is full of unpredictability and tension. The show, tightly directed and paced, features increasingly hostile relationships as the world surrounding executive manager-to-be Tabby (Amy Gilbrook) collapses around her.

The performances from all three cast members are strong, with the mysterious Keeley (Sophie Boyle) doing especially well with her limited time on stage. Nicolette (Dominika Ucar) meanwhile is a bruised, mistreated piece of dirt on the bottom of Tabby’s shoe – one of her jobs is to clean literal dirt off of Tabby’s shoes, just to hammer home the point. During the final act in particular, Nicolette really is the standout, emerging as a satisfyingly manipulative and coercive heroine taking a stand against corporate manipulation.

The story isn’t always executed in the most striking way. The hold-up scene is strangely one of the less tense moments, outdone in terms of suspense by each scene either side of it, and the surprise of an ending cannot help but feel abrupt. That being said, Fear of Roses is still a professionally presented and impressively performed crime drama that leaves you with plenty to think about and even more to enjoy.