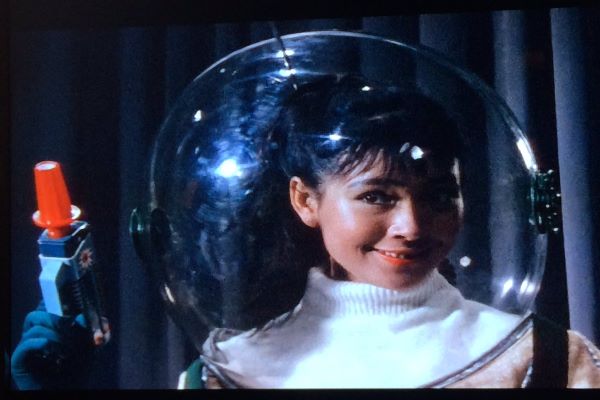 A sweet tooth isn’t enough anymore, as a post-war Japan comes to loggerheads with the tactics of Western capitalism; where the ethical practices of a traditional company and family values waiver at the corrosive touch of glorified media and advertising excesses. Three candy manufacturers Giant, Apollo, and World fight amongst themselves in a battle of the caramel variety. One seeks to capture with the appeal of live animal prizes – another with the life-changing chance to win a subsidised life from cradle to marriage. World though, World takes a more contemporary approach. In a precursor to an industry of Instagram sponsorships, World seeks to mould a plucky young girl into a cover model, promotional dream and corporate shill.

But any misconceptions that this candy-filled caper treads similar lines of a Roald Dahl whimsy are washed away by the brass-necked cynicism and absurdist sense of humour. The decline of the values of Bushido, of a gentlemanly way of conducting business, sit at the forefront of the film’s vision of Japan as it moves further into the 20th century. One of post-war Japan’s most influential filmmakers, Yasuzo Masumura gets a magnificent start to a feature career with the direction of Giants and Toys, adapted from Takeshi Kaiko’s 1957 novel. Ensuring to capture the snappy and quick-paced satire of corporate lifestyle, Masumura manipulates the framing and lighting palette to bring absurdist elements to the film’s composition.

A regular Eliza Dolittle, Kyôko Shima (Hitomi Nozoe) is polished, primed and primped with pride at being sent out into the world. Giants and Toys takes a glorious spin on a manipulated woman turning tides on the patriarchal company which sought to use her image. With her exceptionally captivating, if peculiar, sense of self, Nozoe effortlessly demonstrates how Giants and Toys become synonymous with her demure, yet engaging and energetic attraction. Even as the tomboy rises into the stratospheric realms of stardom, Nozoe’s presence and likability shine over diva attitudes as Masumura’s direction keeps an authentic sense of anger, joy and emotional progression.

The myth of Nine to Five has long since died out, as the push for career creeps ever steadily into our personal lives. It’s not a new thing to strive for excellence and find oneself subject to the deleterious toll on mental and physical health. Popping pills and self-destructive, Hideo Takamatsu’s Mr Goda, the genius behind much of the company’s manipulative tactics and strategies, is without mercy in his endeavours to succeed. Takamatsu’s ability to one-up the competition, while retaining a likability in an antagonistic role pushes the audience further into initially supporting the character.

But for all this insightful gazing into the future of capitalism, the film struggles somewhat with a contemporary audience. Outdated in moments, the attitudes reflect a different generation and though challenged, characters abdicate themselves quickly to adversity. Equally, the cinematic nuances are a touch on the obvious side with their metaphors. The frequent clicking of a broken lighter or the dwindling numbers of tadpoles as Kyoko’s fame increases all work on a visual level but come over as superficial. Tighter is Tetsuo Tsukahara‘s soundtrack. A smashing together of the arrival of Jazz to the Japanese market weaved with a traditional composition.

Friendships trounced, lives wasted and attitudes altered – all over candy. Giants and Toys takes a sharp eye to the post-war boom of Westernised advertising and the fetishism of women and greed while maintaining a quirky sense of originality and uniqueness. The absurdist drama-come-comedy may dip into the realms of ‘no-longer PC’, but never to an off-putting degree, still speaking with a recognisable relevance today.