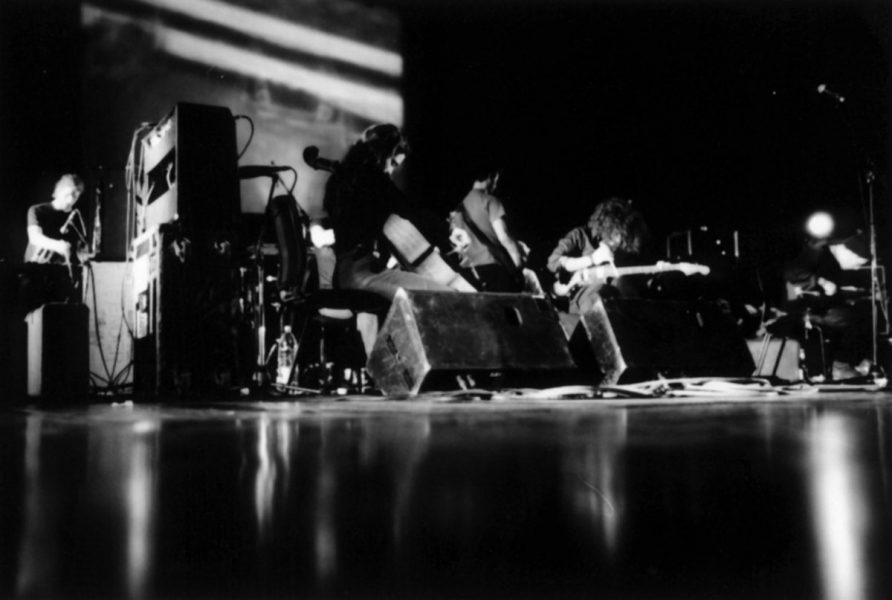 Distortion and disorder come together in an eloquent but unsatisfying show.

"The mother of all jam session"

It might be an incredibly wet and windy night out in the Edinburgh festival, but inside the Playhouse Theatre, Godspeed You! Black Emperor are whipping up an equally tumultuous tempest for their fans. The band shuffle onto stage a little after the appointed time, to no fanfare or announcement but much applause from the crowd. For the best part of the next two hours, they’ll get on with their job in an equally unassuming manner, creating a deafening havoc of noise in the quietest way imaginable.

Those expecting melodies, lyrics or audience banter (or even audience acknowledgement!) will be sorely disappointed here – but then again, anyone expecting those things would not find themselves in front of this ever-evolving eight-piece from Montreal. Their earlier run in the Edinburgh International Festival featured contemporary dance company Holy Body Tattoo, but tonight even this piece of showmanship is stripped back, leaving only the band ferreting away furiously at their instruments for 100 minutes to a projected backdrop of confused images and scenes.

The end result is well-received by those who clearly have a deep affinity with the band, nowhere more so than with their rendition of East Hastings towards the end of the show. However, it’s hard to escape the feeling that we’re witnessing nothing more than the mother of all jam sessions, as these eight incredibly talented individuals come together to create meandering tracks which veer between skull-shaking distortion and heart-wringing harmony. It’s certainly good, there’s no doubt it that – but there’s little doubt it knows it’s good, either.

Perhaps Godspeed You! Black Emperor are deserving of Seth Rogen’s derision in Pineapple Express, but it’s certain they’ll care little about that. The same goes for the fawning fans in the auditorium, which, despite the “Sold Out” sign on EIF’s webpage is at most two-third’s capacity (booking cock-up or up-its-own-arse publicity ploy? We’ll never know). Finally, the band leave the stage as furtively as they entered, with no chance of an encore in sight. All the same, they garner a standing ovation – if you like that sort of thing.