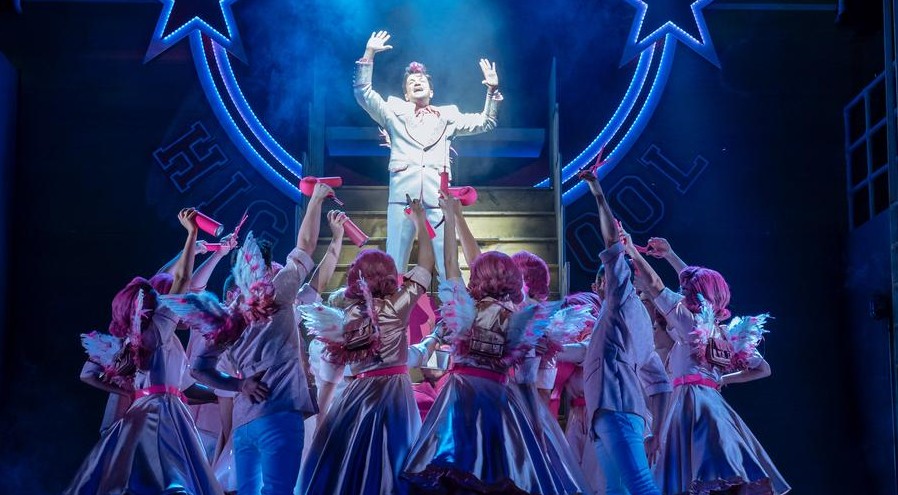 An exuberant, infectiously energetic production of a classic musical

by
Claire Wood
30 September 2021
Grease The Musical preceded the classic movie by seven years, although more of you will probably have seen the film. The stage show is grittier, grungier, cheekier and a wee bit more moody than its Hollywood bubblegum and popcorn cousin. However, this brand new production, explodes into life pouting, preening, gyrating at Edinburgh’s Festival Theatre, and it’s proper greased lightning.
In case you didn’t spend your teenage years sighing over the summer nights, super cool Danny falls for studious, ambitious Sandy. But when they’re flung into the maelstrom of a high school final year with all its attendant pressures, of course they flirt, fight and break up before eventually making up again. Swimming alongside them in the soup of teenage testosterone, we have a pack of posturing T-Birds fluttering around Danny, and then we have the Pink Ladies, prinking and preening in their quest to find a suitable mate.
While the musical was first staged in 1971, this production is based closely on the original script. That said, it has been artfully updated by director Nikolai Foster, and is performed so exuberantly, that this Grease never feels like a show that has had its day. Tremendous choreography by Arlene Phillips evokes the all bounce and angular flourish of rock n’ roll with a hefty helping of Presley-worthy gyrations to make sure we make it past first base. An imaginative set whisks us effortlessly between scenes and the live band sounds like they were having a ball.
Production aside, this is a cracking cast. Dan Partridge is a sweetly infatuated Danny, eager to impress Sandy while not entirely able to shed the idea that he needs to pretend to be something that he’s not. His Sandy (Ellie Kingdon) is perfectly po-faced enough for Rizzo’s send up to be all the fun it should be. She edges on just the right side of empathetic and her Hopelessly Devoted To You is a delight. Rizzo (Tendai Rinomhota) delivers perfectly poised sass along with beautiful vocal control. Josh Barnett and Maeve Byrne pull off the awesome feat of making a daft song about baring your butt, seem like an adorably romantic duet. And Peter Andre as radio DJ Vince Fontaine exudes infectiously energetic charisma.
Grease may not transform your world view, but maybe musicals don’t need to do that. It may well remind you of the extreme inconvenience and occasional euphoria of teenage life. It will almost certainly get you tapping your feet. It might even see you dancing for the final curtain call reprise. You may not find yourself caterwauling You’re The One That I Want on your way home, but it’s likely to leave you feeling that it’s a really awesome thing that musical theatre is back.