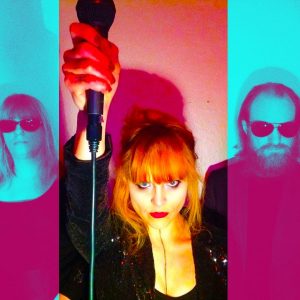 (I Could Go On Singing) Over the Rainbow

An intimate one-to-one experience of hand-holding and undivided attention in the midst of a non-stop wall of noise.

OMG! This performance should come with a health warning. “Autopsy” award-winner FK Alexander as Judy Garland with live accompaniment from Glasgow-based noise band Okishima Island Tourist Association,  she sings live along to the recording of the last time Judy Garland ever sang Over The Rainbow, four months before her death.

This performance is a unique one-to-one interactive experience of hand-holding and apparently undivided attention and love.

Before entering the room, the audience is briefed as to the form for the evening and invited to take a ticket, which will gain you access to stand on the big cross in the centre of the room and connect with FK Alexander.

The small performance space is a wall of noise, housing just 10 chairs for an audience of 30 members. Take the ear plugs that are offered. Those not lucky enough to get chairs are instructed to make themselves as comfortable as possible, and they sit or lounge against the wall, moving around the room during the performance.

The clue for what’s to happen is in the show’s title, (I Could Go On Singing) Over the Rainbow, which is exactly what happens – in fact about 12 times. FK Alexander goes through the motions of approaching the mic and waiting for a brave audience member to engage with her on the big cross. She takes their ticket, holds their hand and then goes through the same motions, noticeably internally counting, raising her right arm for a count of 16, dropping the mic lead for another 16, before starting to sing. At the end of the rendition, moving to the back of the stage, she removes her sequined jacket hanging it on the mic stand, and the red shoes, before putting them on again, adjusting her lipstick, and starting all over again. Each performance lasts five minutes. It’s going to be a long hour!

It’s loud, disturbing and uncomfortable with lots of strobe lighting between each “guest” and definitely not for the faint-hearted. It’s like the Emperor and his new clothes and you’ll be left wondering what the point is. I was counting the minutes until I could escape, but you’re trapped. Maybe that’s the point – like Judy Garland was! This will be the weirdest fringe show you will see. If picking, exercise caution. I wish I had.