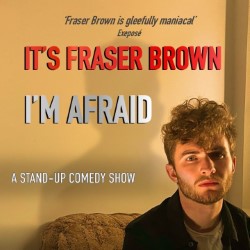 A mixed bag that won't be for everyone, but Fraser Brown just about does enough to show why comedy is his calling

Exeter student Fraser Brown insists that certain parts of his show are really not that great. Suitably then, his solo comedy show is full of hits and misses, all pointed towards a glum outlook on life more fitting of somebody at least double his age. There are laughs throughout his show, especially for those with a more twisted sense of humour, but Brown can’t blend personal reflection and a bold, almost abrasive style of comedy in the way you might be hoping for.

Brown jumps between edgy and at times unsettling subject matters, clearly feeling around for his niche as a dark-humour comedian. At times it comes off well – one recurring gag about benches proves particularly memorable – and his callbacks are often effective at tying the whole set together. At other times however, you can feel how hard he has to work to try and get the crowd to see the funny side. At times the laughs that follow are more out of shock than genuine fun, or more often a peculiar blend of both.

Bolder, more selfless comedy exists at the Fringe – Isabelle Farah for one – but for someone clearly so early in their career, Brown still deserves credit for approaching the show in the way he does. Talking openly about fears and insecurities is always something that should be welcomed, even if Brown acknowledges that it is somewhat clichéd among comedians today. He finds great comedy in these moments, such as when he met a woman with an unsettling clock addiction, but can’t quite balance this with the personal angle as well as he could of. At times erratic changes in subject matter disrupt any real flow, meaning that what could have been a continuous hour of laughs instead feels like a miniature collection of almost unrelated parts. That being said, at least most of them are funny.

Fraser Brown’s show is imperfect and patchy, but also guaranteed to leave certain audience members in tears (particularly those closer to Brown’s own age). A bleak, brave and unnerving comedy set shows plenty of promise for the future. When Brown jokes that you might be able to claim years later that you saw him before he got famous, there is a chance that he might not be far off from the truth.