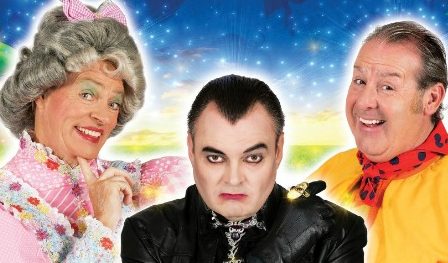 Jack and the Beanstalk

Flashy, trashy and lots of fun

‘If it ain’t broke, don’t fix it’ seems to be the mantra of the annual pantomime at the King’s Theatre. Once again, Allan Stewart, Andy Gray and Grant Stott tread the boards for Edinburgh’s festive entertainment. This year the show is Jack and the Beanstalk, and it’s the usual mix of familiarity and novelty – a glitzy spectacle with impressive production, plenty of local slang and a dash of mild satire thrown in.

Mind you, those of a sensitive disposition should be warned that “more of the same” essentially means dance numbers with Forth One radio DJ Grant Stott announcing ‘Ahm sexy and ah ken it!’ while slithering around the stage in long black gloves and velvet leggings.

There is a Giant Bawbag and his fairy nemesis, The Spirit of Edinburgh Castle. There are at least three mentions of Hibs’ triumph in the Scottish Cup Final, talk of “salt n’ sauce”, and many of Edinburgh’s less salubrious postcodes get a shout-out, with references to “the radge of Jock’s Lodge” and “deepest darkest Leith”. These local in-jokes are a big part of the panto’s appeal, giving the audience a sense of ownership of the show and often getting the loudest laughs. There is also, of course, jokes about trams, the parliament and Nicola Sturgeon (in a frankly disturbing Wee Jimmie Krankie routine.)

If wee ones don’t quite catch the local banter or innuendo laden humour, the production’s use of contemporary pop music is inspired and has the audience singing along together. Jack and Princess Apricot (played by Greg Barrowman and Rachel Flynn in strong performances) come together for a particularly energetic version of Justin Timberlake’s Can’t Stop the Feeling.

The star of the night, however, is Allan Stewart as Mother Trot, the matriarch that holds the show together (linear narrative is not its strong point) while delivering the naughtiest lines. In a segment where the cast interact with the audience, Mother Trot’s acidic remarks (‘Would you have worn a nicer top if you’d known this was going to happen?’) are somewhere between Ma Broon and Julian Clary and a complete delight.

As our Junior Correspondent (your reviewer’s seven year old nephew) commented after the show: ‘The whole thing was great, the first part was better than the first, Mother Trot was my favourite and the music bits were the most fun.’ Searing, discerning analysis there. Jack and the Beanstalk is a shiny, glittery Christmas parcel – flashy, trashy and lots of fun.