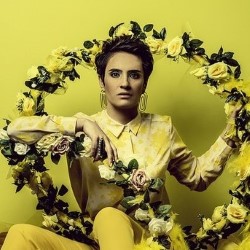 Brighton comedian rages against the machine and her mother

A ball of rage bounces across the stage, bellowing like a mentally unhinged Ray Winstone, confronting idle couples sitting comfortably. Hell hath no fury like a woman scorned, but Jen Brister has always been angry, enraged by the little idiosyncrasies of the people floating around her.

Meaningless starts off by poking holes in the idea that men and woman have equal relationships with their mothers. Brister now lives with her elderly Spanish mother who drives her crazy, while her brothers manage to sustain a cool and relaxed relationship with her. Mothers adore their sons and want the best for their humble little worlds, but talk from the mums on the street would suggest daughters are their most natural enemy. As a mother of twin boys herself, she had anticipated having a girl to channel her righteous feminist outlook on life, but now understands where the adoration of these young men comes from.

Living in the south of England, where a lot of insanely posh or clueless people collide, is what continually keeps Brister’s flame of wrath lit. She delivers a hilarious and scathing indictment of nearly everyone in her life with imitations reminiscent of saccharine mummy’s girls or a forty-pack-a-day Michael Caine breathless from just existing. Brister should have really called this show Breathless, because the amount of exertion she puts on her body to deliver a comedic performance is something wondrous. Half of her punchlines are shouted with a force that exploits strained veins across her shoulders, as she screams at passers-by to wind their necks in.

A lot of time is spent banging heads with the countless people that fail to pick up on the basic rules of tact that constitute a normal human being. Brister tells us although she does still love most of these irritating morons, her rule of stand-up for her is to say the things you can’t say off-stage to an audience of strangers.

It’s a performance with intensity and wit that occasionally features Tim and Eric levels of physical and mental commitment to a looping joke. This intensity debuts early on as a flurry of kisses that goes on for slightly longer than it should and pays off in a convincing period pad advert, showing what happens to any unfortunate mug who takes liberties with a woman’s purse. Brister might have nailed her on-stage persona as a woman who doesn’t need a mic to emote her frustration, but she also has an exceptional sense of comic timing.

Meaningless is a title intended to imply the show has little overall significance to any of its explored themes, and while this is partly true, it does touch on the typical social and economic topics you would find in an outlet of outrage. Brister’s overwhelming confidence, acute observations and unapologetically brash delivery allows you to lash out with her at a world gone mad.