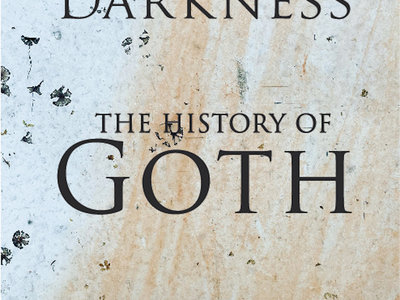 John Robb
The Art of Darkness: A History of Goth

Dark entries get put under the spotlight

Robb has no time for pomposity or affectation

Few subcultures have been as misunderstood as goth. Often dismissed as dour, hedonistic youths wearing black in graveyards, or more recently, Gen Z-ers doing make-up tutorials on TikTok without any appreciable knowledge of the art form, this book is timely indeed. Prolific writer and musician John Robb kicks out the cliches associated with goth, to provide something much more layered, rich and fascinating.

A real labour of love (a decade in the making) Robb’s book takes as its jumping-off point the architecture, literature and philosophy that was deemed “Gothic”. There is an academic approach here, but never is it inaccessible. There is also, as Robb asserts, a socio-economic aspect to the goth scene, emerging as it did at the tail end of punk. Goth can be regarded as the more glamorous cousin to punk, but to dismiss it as decadent or frivolous is to miss the point. Of course, a crushed velvet, vintage aesthetic is one element, but goths always had something to say. Witness Jaz Coleman from Killing Joke, and his apocalyptic visions, many of which proved prescient. Or Siouxsie Sioux and Robert Smith writing about mental health issues, racism and alienation, when such issues still remained taboo in the 70s and 80s.

Robb writes, “If postpunk was the rejection of punk rock’s over-reliance on the Chuck Berry riff and recycled Americana, goth was European, neoclassical and introspective, and  pulling from a different tradition.” So, the many strands are woven together, reflecting goth’s eclecticism and many textures: the dark storytelling of folk music, the grandeur of Wagner, a funk bassline, a primal scream from the dark heart of the psychedelic 60s. All of these forms and more can be heard in the music.

The first part of the book takes in influences, while the second lets key artists – from The Damned to Bauhaus – tell their stories. And it’s a hell of a ride, with controversy, drugs and glorious sexual liberation and fluidity tucked into its DMs. Far from being humourless too, there are a lot of wry lines. Robb has no time for pomposity or affectation, and this exhaustive book reflects this. I devoured it like an eclair, and wanted to hear the music all over again. The Art Of Darkness is an absolute triumph – vivid, insightful, and witty.

The Art of Darkness is published by Louder Than War Books and is out Mar 2023. Signed copies are available for advance order, priced £20, from the Membranes bandcamp page