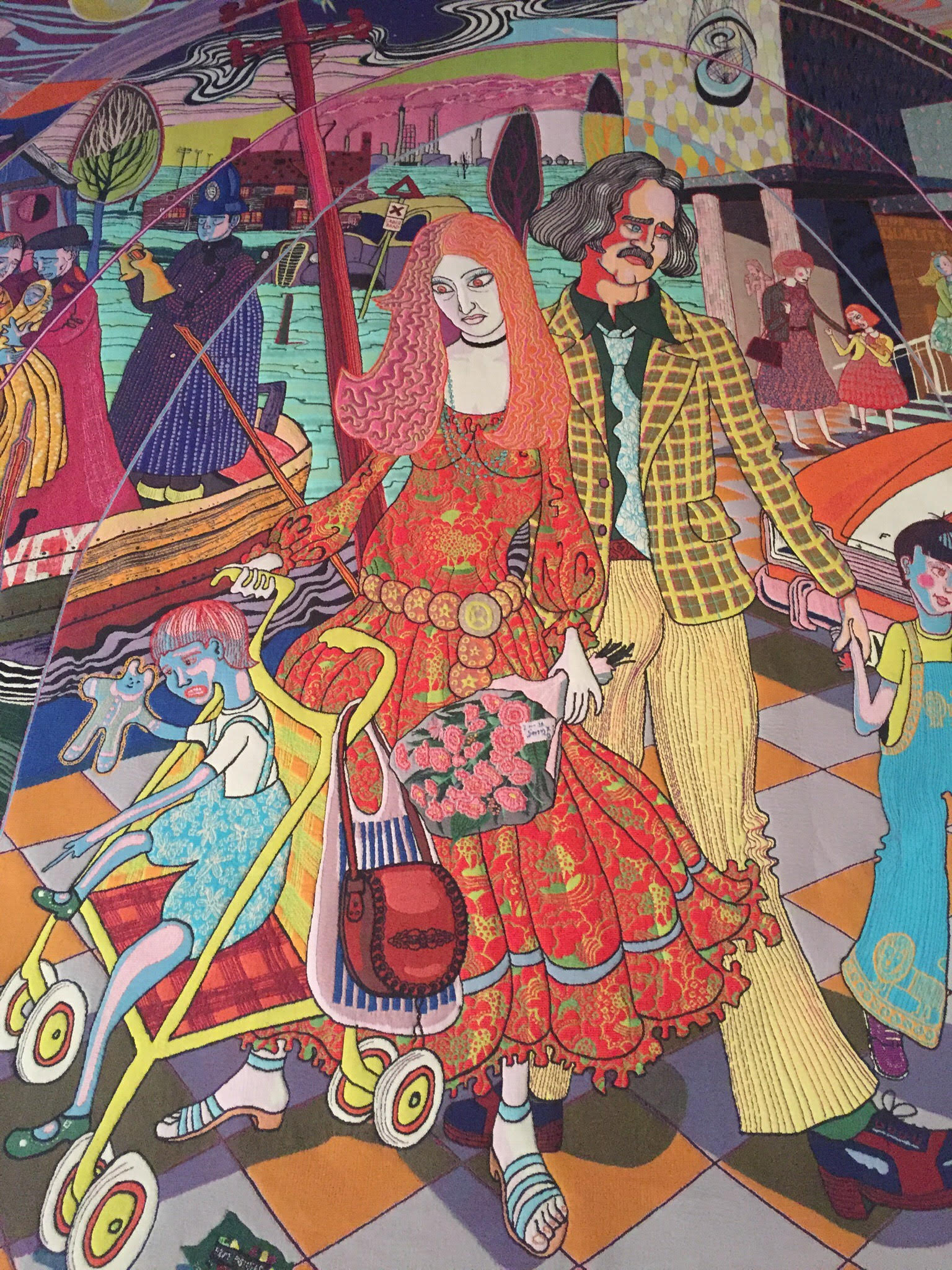 Julie Cope’s Grand Tour: The Story of a Life by Grayson Perry

Bursting with life and colour is the first Scotland-based solo exhibition of Turner Prize winner Grayson Perry. Renowned and celebrated for his employment of traditional craft making techniques, predominantly in the form of ceramics and tapestry making, it seems fitting that Grayson Perry’s first solo show in Scotland is hosted by Dovecot Studios. The exhibition presents Julie Cope’s Grand Tour: The Story of Life by Grayson Perry, which explores the fictional life of Perry’s character, Julie Cope.

Designed to represent the anyone and everyone, Julie Cope embodies the celebrations and pitfalls of an average life. Often finding that Essex, his home town, is portrayed in a certain light, Perry wanted the exhibition to explore an alternative Essex, one more representative of everyday reality and local activities. Told through large sprawling tapestries, prints and a ballad spoken by Perry, the life of Julie Cope is one of love, spirals, hope and tragedy.

The exhibition pulsates with liveliness; present not only in the incredibly impressive and large-scale tapestries, but also in the minute details such as the yellow and pink cabling that present the ballad which is played on loop. Despite the large scale of the tapestries, their slanting layouts on canvas-like frames create an intimate atmosphere in the space. The walls are lined with pink and it very much feels as if Dovecot has been transformed into Grayson Perry’s ultimate interior. The ballad sounding with his voice draws the viewer in more closely, allowing for a multifaceted viewing experience.

The threads of the tapestries boast an incredibly impressive blend of details, each documenting and presenting various stages in Julie Cope’s life. Perry’s voice rings resolutely through the speakers, taking the viewer on a journey into his imagination. The exhibition is a vibrant invitation into the life of Julie Cope and is a life that speaks to everyone in some way or another. Through her narrative, Perry has succeeded in capturing the essence of life and human fragility. Documenting her journey from her birth in the Canvey Island Floods of 1953 to her tragic untimely death, Perry takes the viewer on a spiralling journey of his fictitious character.

Often employing collaborative working methods within his practice, Perry’s tapestries have been constructed in collaboration with Flanders Tapestries. Designed by the artist utilising an interactive pen display, the compositions were then translated into codes for a digital loom. Alongside this, Perry has collaborated with FAT Architecture for Living Architecture to design A House for Essex. This sees the creation of his most ambitious artwork so far – a real life house. Perry created several whimsical versions of the house, drawing heavily on influences from India, in particular the Taj Mahal, as well as secular chapels.

Within Dovecot Studios, his collaborations with the architectural firms are explored and displayed in a museum-like layout, giving the viewer an insight into both his working methods and the process of construction. Ceramic tiles which adorn the house, architectural renders and films of Perry during his site visits all harbour and allow the viewer to engage more closely with both Grayson Perry and his fictional lady, Julie Cope.