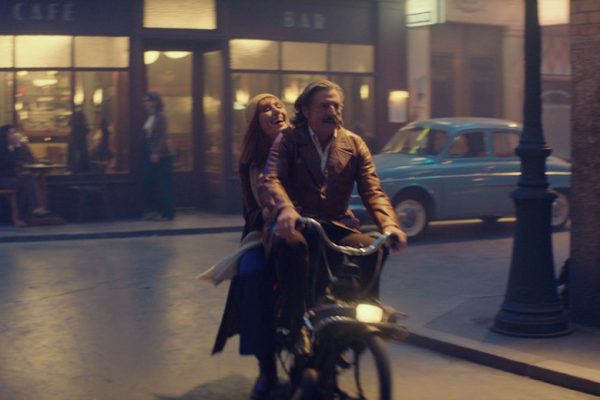 Westworld, but closer to reality, La Belle Époque places the addictive nature of nostalgia at the forefront of its narrative. Posing that this re-enactment of the past has its benefits, but it’s drug-like properties are far from a healthy escape, that the past is pleasurable but has capabilities of crippling the future. When disillusioned artist Victor crosses the path of screenwriter Antoine’s invitation to take part in his ‘time travel’ show, in which wealthy individuals embark on nostalgic trips, Victor uses this as a means to travel back to the 70s’, where he met the love of his life.

Canet’s ambition, to re-ignite the creative furnace of Victor’s talent, seems to tie itself into his failed marriage with the Cheshire grinning cheat, Marianne. Fanny Ardant achieves a rarity within romantic comedies. A redemptive arc, from callous, understandable frustrations, to an empathetic character without reversing everything which made Marianne interesting. It comes as no shock, that the love of his life has always been Marianne, and the young woman Victor meets in the café, Margot (Doria Tillier), with whom he falls in love, is a refreshingly engaging performance, echoing Brigitte Bardot or Anna Karina. And who would deny a revisit to the sound score of the best days they had?

In a world in which you could dine with Marie Antoinette, get royally leathered with Ernest Hemmingway, or chat it out with the Third Reich (for whatever reason) the beauty of Nicolas Bedos’ script comes from the sincerity of Victor’s request to not live the life of another, or to piggyback stories, but merely replay his own. Daniel Auteuil’s transformation from beleaguered, pathetic punching bag of a man who resigns himself away from social media and digital dominance into rejuvenation, though reliant on the past, is as humorous as it is charming. His chemistry with all other performers, from lead to side, is exceptional, suggesting a genuine sense of believability as he delves deeper into Antoine’s French cafes and weed dens.

A cautionary word, Bedos’ film is for the sweetest of teeth. Straying from outright happy endings, there are heapings of sepia-tinted sentiment. Keeping La Belle Époque somewhat grounded, Bedos stringently maintains its plot device, refusing to deviate from the narrative mechanics, where so many other romantic-comedies would fall back into a traditional third act structure. The resolution sticks within the boundaries Bedos’ has set-up, a finale which certainly offers a distinct difference from the opposites the genre would habitually fall upon.

La Belle Époque is perhaps the closest a French romantic-comedic farce will achieve recognition from a Hollywood audience. In certainty, the most recent with pangs of Richard Curtis. It’s this dedication to its plot-devices and characters make Bedos’ film a rousing success of comedic gold, with just enough drama to drive forward our leads. You may leave with toothache, but sometimes an indulgence in sucrose serves to remind us to unburden ourselves of pessimistic attitudes, gander at the past, but continue to move forward with our lives.

At Filmhouse Edinburgh until Thu 5 Dec 2019