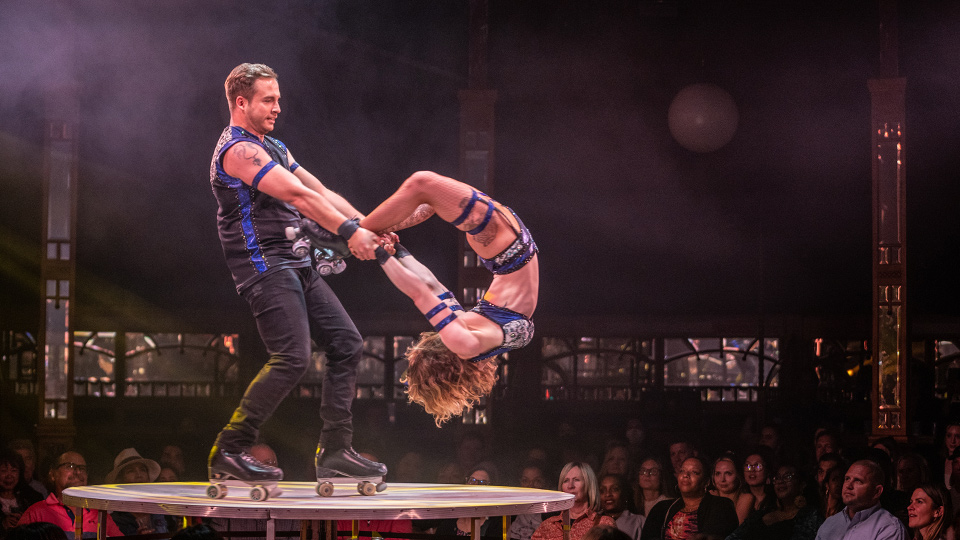 A stunning show that takes traditional circus and pushes its to its limit, resulting in an affecting, sensational hour

Waiting in the queue outside for La Clique,  you can hear the traditional symphonies of the circus fire up as the crowd snakes its way into The Beauty. It at once sets the scene perfectly, and also leaves you completely unprepared for how the show pushes the limits of traditional circus. It is breathlessly exhilarating, intensely physical, and scantily clad… and that’s just the Jesus act.

Every act, from an eccentric comic on a unicycle to a burlesque star in a giant bubble, in some way or another push themselves to the limits of their craft. Classic circus acts like sword swallowing are reinvented and given new spins, making you feel like a giddy young kid again and genuinely excited to enter the big top. All the acrobats possess an extraordinary beauty and grace, while every act on the billing has a completely different way to work up the crowd and get the party started. At times the audience will be in hysterics, while at others they will be blown back into their seats. La Clique is unbridled, unbelievable entertainment.

It isn’t just the variety of acts that impresses, but the show’s execution and direction. Changes between the acts – some of them requiring quite elaborate technical set ups – are done swiftly and never interrupt the frivolous atmosphere. Lavish lighting and music makes the whole show feel like a grand event; the kind of sensational slice of culture that might only roll into town once in your lifetime (except the La Clique crew are Fringe veterans, having made their Edinburgh debut back in 2004). While all the performers are celebrated, it is the roller skaters who will leave your mouth hanging open, with a set of such scale and drama that it is scarcely contained inside a venue that feels far too small for them – “stay seated if you want to keep your teeth,” as the MC puts it.

Going bigger, bolder, and more exciting than many productions dare, La Clique is not an experience that you will forget in a hurry. The show is surely one of the festival’s biggest success stories, and by extension one of the finest circus collectives anywhere in the world right now. La Clique gives you newfound faith in people’s ability to be weird and expressive in all the right ways, bringing these qualities to the stage in thrilling, life-affirming fashion.