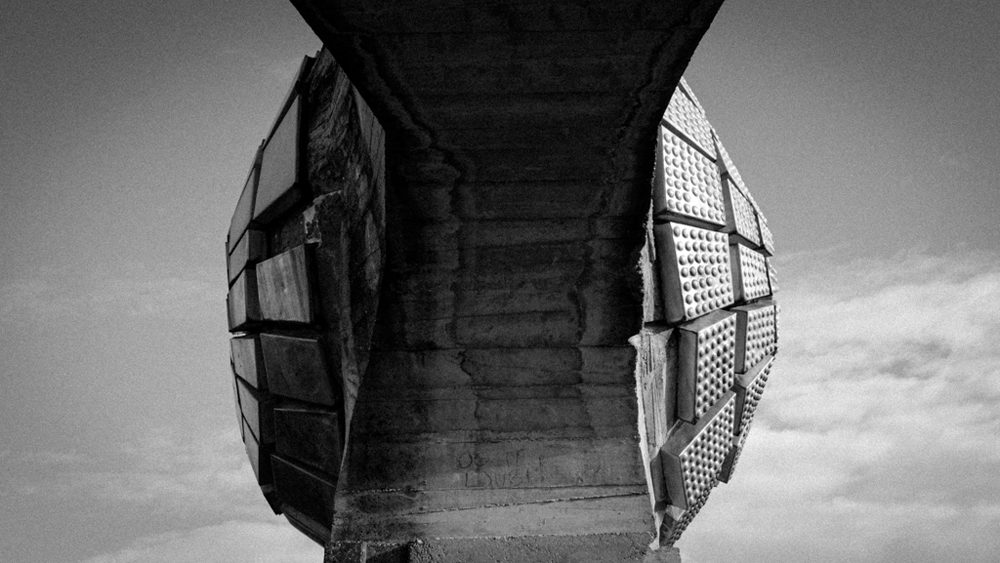 Shot mostly in grainy black and white, Last and First Men opens with a fantastical low-angle image of a floating arc gliding above us. Tilda Swinton narrates from another planet in the future — a member of ‘The Eighteenth’ — in her inimitable soothing and sage tones, telling us of the follies and evolution of humanity, while slow-moving distance shots of otherworldly statues and epic structures stare at us from an empty world.  It is immediately clear from the foreboding storytime prologue that this is an unorthodox art piece rather than a predictable sci-fi movie.

The film is essentially a visual monologue, with Swinton’s unnamed character describing the end of life on earth (caused by an astrophysical disaster) and the unrecognisable final physical appearance of human beings. Open to multiple interpretations, it might be a comment on our destructive relationship with nature or our connection to religion. It might also be an anthropological observation of societal evolution on a grand scale. It sounds weighty, but the monologue manages to keep us engaged with digestible ‘chapters’ and eerie prophecies. There is narrative, too, amongst the ‘facts’. The narrator is spinning a story, albeit on an epic scale. Discoveries are revealed and surprises dropped. We build to a climax as the end of life everywhere approaches.

The striking landscape shots are also effective in holding us. They feel meditative, pulling us along on a serene and almost entirely monochromatic tide, forcing us to look at stone and architecture from a fresh perspective. The soundtrack, too, is hypnotic, relying on drawling synths and strings to create a sense of wonder and timelessness.

Last and First Men is a history lecture from the future; an imaginary catalogue entry in an end-of-time encyclopaedia of humanity. It is a fantasy piece that aims for what the best speculative art does: to encourage us to engage with the present and see the world better through the prism of fiction. The audience for this will be niche and casual film-goers will no doubt abandon it early on. However, treating it as a thought-piece on civilisation and succumbing to its mesmerising qualities provides an unusual and rewarding experience.