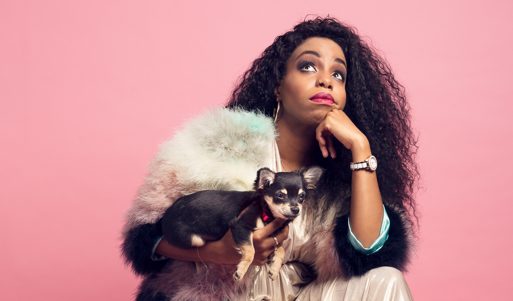 A high-energy show with real flashes of future comedic stardom.

By her own admission, London Hughes is a Superstar but nobody has realised it yet and her show does indeed show some flashes of future comedic stardom. She has already won a prestigious comedy award and is now ready for her big break.

Here for her first ever Fringe run, Hughes bases her comedy show around 90’s television shows ranging from Who Wants to be a Millionaire and Strictly Come Dancing to Blind Date and Wheel of Fortune. It is a high-energy performance from the off, telling the story of London’s struggle to make it to superstardom as a black female comedian. There were few such role models for her to aspire to as a youngster growing up in Brighton so instead she decided she would be…Britney Spears!

After some uproarious regaling of the difficulties with this aspirational role model she instead turns her attention to the black females she does see on the television and sets her sights instead on becoming the new Angellica Bell (TV presenter). And she does it, successfully going from self-proclaimed ‘uncool’ teenager and avoider of boys to the confident and sassy young lady seen on stage tonight with a TV presenting job to boot.

It doesn’t come easy though and along the way she is faced with racial discrimination and showing too much skin to Billy Connolly which she retells in a hilarious sketch, ably supported by the unsuspecting audience member chosen. The night The Wee Review are in this works really well but there are moments where the audience look somewhat uncomfortable about the questions put to them and the responses do not all come as London expects putting a little pressure on her comedic ability to improvise.

This is a high-octane, lively show which is a solid debut for Hughes although she will want to improve the sound and visual quality if she is to become the Superstar she knows she is.