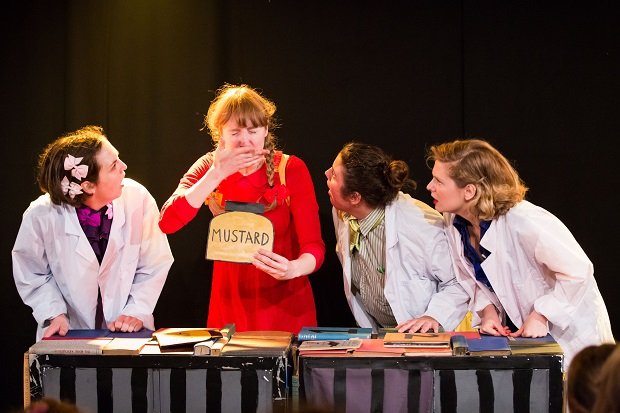 A crocodile librarian sits down to read one last book on her final day, join her getting sucked into the adventure, mystery and intrigue. In the fairytale world of Bow-on-Tie, where boys are boys and girls are girls and the mayor is a crocodile, everyone knows the rules and everyone knows their place. Except, Abigail dreams of being a rocket scientist, and Henry dreams of being a baker and they are best friends, all of which is definitely against the rules!

From the moment the audience enters, Henry on the piano has the children giggling, pulling faces as he plays different refrains. As the librarian reads her book we discover Abigail has her suspicions about the Mayor, what happens to the children in detention and soon, in a slightly predictable way, the darker underside of Bow-on-Tie is revealed.

The saccharine sweet nature of the town is played to great effect, especially with Abigail’s vacuous mother, who was the model student and can’t understand why her daughter refuses to follow suit, insisting on picking apart holes in fairytale plots and wanting to save herself rather than waiting around for a boy to do it. And while the message of not needing to go with gender stereotypes is not subtle but it is done in a very positive and affirming way. The adults and older children in the audience might spot where the plot is going rather early on but it doesn’t detract from the comedy, the enjoyable acting and the particularly slick choreography throughout. The well rehearsed scenes involving creative uses for books as props are a particular delight.

Catchy songs and cleverly made props Mustard Doesn’t Go with Girls well pitched for children with a positive message and lots of laughs. Thoroughly rejecting the traditional fairytale tropes and thumbing its nose at gender stereotypes this is a fun and lighthearted play about being your true self.