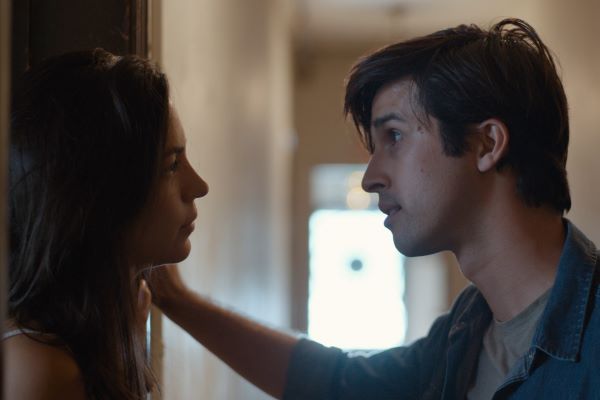 The travails of the twentysomething dating scene dissected

Take three girls. They’re self-possessed, assertive, and… frustrated. Over evenings of tequila shots and wine (a recipe for a heart-attack hangover if ever there was) they discuss careers, love, life and the consistency and trajectory of previous boyfriends’ ejaculate. And who said modern romance was dead?

Of course, it’s romance (or a fulfilled love life at any rate) that the three crave, although they can’t quite articulate it. Their self-protective cynicism is in danger of metastasizing. Self-absorbed Sage (Dakota Gorman, who also helms) has a degree, and is an artist, but ekes out a living working as a chain store barista. A job which involves dishing out doughnuts as well as hosing down the smeared washroom. She seems oblivious that co-worker Kyle (Dillon Lane) adores – or at least has the hots for – her. Their endless putdowns of each other create a wall of indifference. Casey (Natalee Linez) works in insurance – enough said. And Morgan (Emma Deckers) is an unpaid intern at a publishing house who also works as an escort, slapping and spitting on young executives for money.

Generally, all three young women are disillusioned with life and love, and drinking away their sorrows just isn’t helping. Sage is within a hair’s breadth of a break-up, while Morgan meets a smooth-talking nerd Lowick (Matt Angel) in a coffeeshop (where else?), and into whose arms she finally falls. Lowick values honesty, but when she tells him she used to work as an escort he’s incredulous and throws her out of his apartment at 3am. And, biggest crime of all, he doesn’t return her texts.

That sums up the plot, such as it is. There’s much sneering Venus versus Mars banter that reflects the disconnect between today’s millennial women and men, and way too much sofa-bound self-absorption. When Morgan finally confronts Lowick in a busy bar wronged female viewers will stand up and cheer.

The film nicely reflects contemporary twentysomething angst and ennui. The playing is great, it’s nicely edited, and there’s a great use of music (Antonio Andrade), and it all looks good thanks to photography by Carter Ross. What lets it down is an out-of-shape script. The story might be nicely observed, but where it should be funny it’s desiccated and the emotional scenes are often a tad shop-worn. Fatally the storyline is just a series of scenarios reaching no real conclusion. And that’s a shame because it could have been so much more engaging and enjoyable.