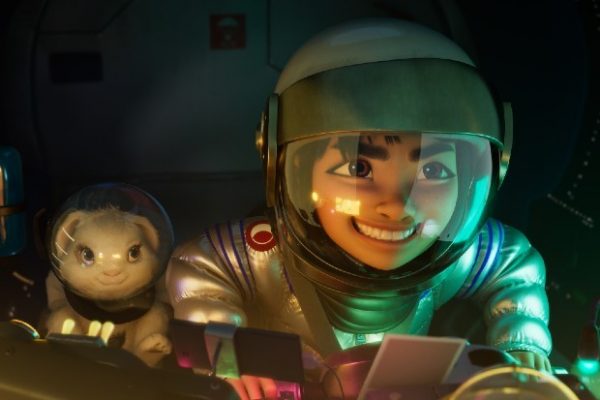 Fairy tales and stories sit at the hearts of children and move with them as they come to understand the world and its intense complexities. When her mother passes, and her father slowly begins to introduce a new partner into their lives, Fei Fei can’t help but feel a personal attack on her mother’s memory, spurred on by the correlations she draws with the stories she heard as a child. In an attempt to prove her family wrong and maintain the last connection with her mother, Fei Fei makes a journey to the moon to prove the existence of the moon goddess Chang’e from her mother’s stories, and return things to the way they were.

The animated musical has taken a beating of sorts recently, and despite Disney still edging their traditional song laden feature, other studios have put down the baton in favour of story or animation style. Director Glen Keane is no stranger to the format and does a fine job in accelerating emotional drama with harmless jokes and a bouncing pace as Audrey Wells’ writing conjures a world in which science and magic come to an agreement as Chinese myth meets Western filmmakers. Sporting what is perhaps the animated world’s most adorable rabbit, Over The Moon boasts a vibrancy which, while brilliant in ornamenting a style, is excessive in the palette. The film’s colour scheme suffers from a lack of softer touches which it uses sparingly, but magnificently when doing so. It’s a polarising aesthetic, which manages to be creative and vibrant, yet also lacks a finesse.

And on the subject of the soundtrack, there’s an imbalance in scoring and lyrics. Steven Price’s composition is fitting, and a steady soundtrack to follow, but the lyrics are ham-fisted. Christopher Curtis, Marjorie Duffield and Helen Park find little to no subtlety in the film’s opening numbers, bordering on operatic in their exposition. That is until Hamilton superstar Phillipa Soo strides in as antagonist Chang’e. Launching into a bombastic introduction and rhythmic rap-battle of table tennis (yes, seriously) the film steadily ramps up the soundtrack as the verses somewhat improve and function less as exposition, and more to reflect character’s intentions and inner thoughts.

The journey Chang’e undertakes by the film’s conclusion is a surprising turn of the narrative, and firm step to make in what is fundamentally a children’s movie. It takes a realistic approach towards love and death and the inevitability of things, but Soo conducts the performance which such sincerity she counterbalances her previously brazen exhilaration. The outcome mirrors Fei Fei, as Cathy Ang’s innocence and determination are a match for Soo, but bring about a more traditional and touching conclusion.

A concoction of familiar tropes and narrative angles, Wells’ script pokes its head out in fresh ways – particularly in infusing Western tropes with Chinese culture. Portions of the animation revert back to a two-dimensional style which animation fans will long for, evoking tapestry work from the Ming Dynasty. Moments such as this and Guo Pei’s absurdly sumptuous costume creations subvert Keane’s reliance on contemporary tropes in animated films, from irritable side-characters to shoe-horned music numbers and tensions. Pei manages to emulate tradition, but jives it up for a contemporary sci-fi aesthetic.

Over the Moon aims high and reaches the heights it was expecting too – but had it the sense to merge its style choices, score and character development more evenly it would have become a stratospheric masterpiece which would stand alongside those films aimed at children, but which maintain a presence which reaches all.