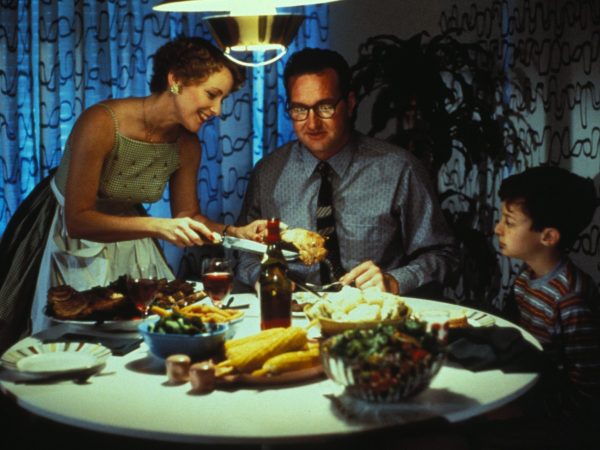 Comic shocker with some nice touches

Comic shocker with some nice touches

This little 1980’s horror is set in 1950’s suburbia. The theme tune is “Cherry Pink and Apple Blossom White” a mambo-inflected dance song of the era with a crazed Cuban wail. Mom (Mary Beth Hurt) is a tiny wife and mother, her ten-year-old son Michael (Bryan Madorsky) is tinier still. Looming over them is the giant man of the house, Dad, played by Randy Quaid who is every bit a representative of toxic masculinity as the men with the barbecues in the new Gillette ad campaign. In fact he works for a company called Toxico which deals with dead bodies.

Little Michael is afraid of everything, especially his father for whom the boy is one big disappointment. The conformity of the 50’s American Dream is one of the film’s main (soft) targets. Michael’s anxieties consist of bad dreams one of which sees him drowning in a sea of blood. Freudian or what?

It is easy to see how the LGBT+ (not to say vegetarian) community has taken the film to its heart – the misunderstood boy growing up in a world that seems weird and scary. The adult world is full of secrets and lies. He thinks his parents are strange and the feeling is mutual.

When the family sits down for dinner they always seem to be eating meaty leftovers. “What were they before they were leftovers?” asks Michael. “Leftovers-to-be,” replies his father ominously. Are Mom and Dad cannibals, or is it just Michael’s overactive imagination?

The film has its moments of gore – the hand emerging from the kitchen sink twitching from the action of the waste-disposal unit, for example. Everything on the surface is shiny, the cars and the modernist interiors (the mirrors and coffee table may be kidney-shaped but what’s on the dinner-plate is distinctly liverish), but there’s something ugly looming just below the surface. The main players are excellent – Quaid is especially chilling as the dominating Dad. And the ever watchable Sandy Dennis as the kooky school social worker – “You’re not a real doctor,” says the precocious Michael – is on screen way too briefly.

Balaban has difficulty in balancing the humour and shocks, he doesn’t seem to know whether he is making schlock horror or a bloody, dark comedy. Often the sunny 50’s setting works against the story.  It’s impossible not to wonder what a John Waters or a David Lynch would have made of the script. That said it’s a nice little shocker, beautifully shot (Ernest Day and Robin Vidgeon) with some great low angles and inventive camerawork. The set (Andris Hausmanis and Mike Harris) with its sinister greens and anxiety-inducing squiggly wallpaper is also worthy of mention.