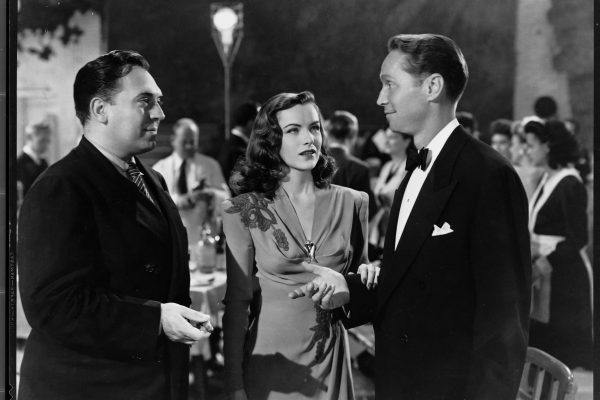 This might be at the pulpier end of the film noir spectrum. It might be hobbled with some bad acting… But it’s saved – oh, how it’s saved – by Siodmak’s suspenseful direction and glorious night photography courtesy of Woody Bredell.

The plot is daft. Engineer Scott Henderson (Alan Curtis) is out on the razzle while his estranged wife is at home busy being murdered. Henderson meets a mysterious lady in Anselmo’s bar. She is in a fabulous hat, they have drinks and go on to the Boom-Boom Revue.

But the lady vanishes and no one the police interview – the barkeep, the revue singer (Aurora), or the wide-eyed review drummer Cliff (Elisha Cook Jr) who so often played psychotic neds recall seeing the woman in the remarkable headgear. Henderson’s only hope is his fearless secretary Carol “Kansas” Richman (Ella Raines). The couple looks like a cut-price Clark Gable and Gene Tierney.

Kansas retraces her boss’s steps dressed up as a gum-chewing “hep kitten” and tries to wangle the gen from Cliff the Boom-Boom percussionist whose masturbatory drumming is a sight to behold. Might Henderson’s best mate Marlow (Franchot Tone) hold the key? There’s a predatory killer on the loose and an off duty cop (Thomas Gomez). The range of suspects is stacking up.

It’s interesting that at the centre of the movie it’s a woman who is the hero and who propels the plot (unusual for thrillers of the period). There are some delightful Moderne interiors, especially that of the art-loving Marlow whose apartment is full of grotesque, sculpted heads. The denouement gets a bit hysterical but all’s well that ends well.

Siodmack brought many German expressionist touches to his movies. He was also great at bringing out the best in actors,  even those as wooden as Raines and Curtis. The director went on to make classic thrillers like The Killers, The Spiral Staircase and Criss Cross. Phantom Lady is nowhere in their league and it may be uneven, but it’s suspenseful and great to look at.