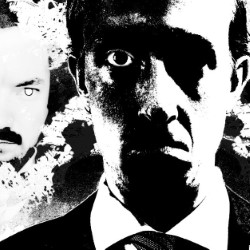 Providence: The Shadow over Lovecraft

H.P. Lovecraft is a pivotal and controversial figure in horror. Pivotal; as his short stories have influenced countless writers as well as being adapted several times and controversial; due to the many xenophobic and racist opinions he espoused in his lifetime. Does this detract from his work? Well, that is just one of the facets that this interesting witty play looks to deal with.

Providence opens with Lovecraft’s (Simon Maeder) attempted suicide. He is however interrupted by the ghost of Edgar Allan Poe (played by Dominic Allen), who convinces him to become a writer. Curiously the piece is framed like A Christmas Carol, with Lovecraft being visited by three ghosts. Although Providence is not entirely faithful to Dickens, as the ghost of Poe recurs throughout, while the other two only visit once. This framing does not seem entirely necessary although all the interactions with Poe are very entertaining.

As the play unfolds it becomes an interesting mixture of fact and fiction. While the show is mainly biographical, there are scenes from some of  Lovecraft’s most famous works such as Shadow Over Innsmouth and The Call of Cthulu. These recreations are very well executed and properly creepy. These scenes also highlight the great sound design work by Wilfred Pethbridge. His sound/music choices adding an extra layer of menace to the scenes.

Tonally the piece is intriguing. Providence is frequently comical, but it also seriously delves into Lovecraft’s tortured mind and life, while the aforementioned story extracts are pure horror. Maeder and Allen however deftly manage these tonal shifts so they never feel jarring to the audience. Both should also be commended for not giving us a sanitised portrait of Lovecraft, but one that shows him in different lights. Even if some of those lights are very ugly indeed.

The play also makes it clear that, while Lovecraft had many hateful opinions, he reserved his greatest hate for himself. Not only that it explores how insanity, as well as being a topic in his stories, is also a theme that ran through his life.; both his parents were institutionalised. As well as this he seems to have an array of strange relatives. All of whom are played well by Allen, who performs as a whole cavalcade of characters over the hour. In the end, Providence is a cleverly staged, well-acted, frequently funny and very informative look at Lovecraft and certainly will appeal to any horror loving Fringe-goers.