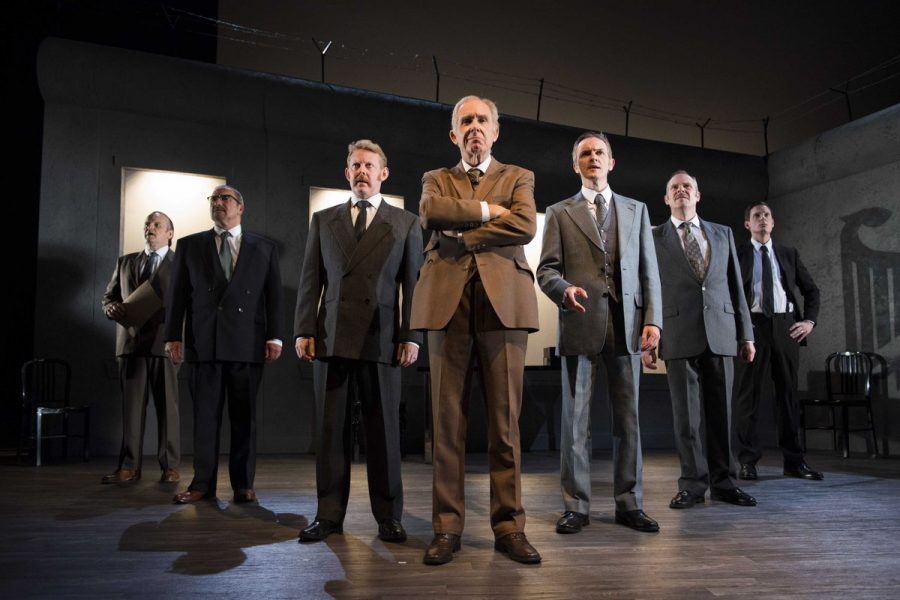 The thin crowd shuffles into a rather echoing Empire Theatre, Eden Court’s largest venue. Even with the whole audience concentrated in the stalls, there are many empty seats. No music is played as the audience files in. Odd at first, it soon seems a stroke of genius: self-conscious, people speak in hushed tones. You never know who might overhear. And so our arrival sets the tone for a tour de force of spying and lying, of meaning and scheming.

The simple set is lit with flair and precision – just enough light to reveal the barbed wire atop cold stone walls, simple furniture and the giant eagle symbol of the Bundestag. From time to time, projections above transform the stage into a church, a demonstration or even significant stops on Willy Brandt’s career journey, but for the most part, we are firmly placed in Bonn’s corridors of power during the period of Chancellor Willy Brandt’s reign.

The central conflict allows us to see events through the lens of Guenther Guillaume, the East German spy who spent almost two decades at the very heart of West German politics: he and his Stasi handler Arno Kretschmann are almost ever-present on stage, with Kretschmann acting as narrator and Guillaume’s conscience at once. Amongst suited political establishment figures, Kretschmann stands out with his jeans and leather jacket – instantly communicating his invisibility to all but Guillaume who only just pulls off the politician with his too-big suit and awkward manner. Often plunged into half-shadow, the shady handler manipulates and coerces and cajoles, highlighting the whim of all our principles. Even given Germany’s then very recent past, Democracy explores the weakness of all men to stand by their principles. Willy Brandt, master of the simple gesture and the eloquent silence, at the height of his popularity, complains that he is ‘on a train from nowhere to nowhere with no purpose.’

There is much, much to love about this production. Rapture Theatre have pulled off a difficult feat: make an audience care about a bewildering number of little-known German characters with long, complicated names and even more complicated histories. The creative choices are imaginative with outstanding use of freeze frames to great effect. The stage lighting is varied and effective, with two contrasting and very nifty train sequences. Intelligence-style photography projections introduce key characters and give the audience enough background to enjoy the plot. As an ensemble, the acting is exceptionally strong, with particular moments of brilliance from Jim Kitson as Horst Ehmke – a thoroughly committed performance throughout – Jack Lord as rival Helmut Schmidt and Sean Scanlan as Herbert Wehner, parliamentary party chief. The play is a lot wittier, subtler and cleverer than expected and whilst being very entertaining, also raises the big questions of loyalty, identity, integrity and (given the fickleness of human nature) democracy itself.

Thought-provoking though it is, Democracy would benefit from a leaner script. At times, the flow loses out amongst the detail, and some of Guillaume’s lengthy reflections would be more effective if curtailed, particularly in the second half where the discovery of Guillaume’s duplicity feels protracted. Some of the SFX end abruptly instead of being faded out properly which seems an odd choice.

But the play holds up a mirror to the here and now, as its lines chime with our current political climate: ‘Defeat is the only thing this party understands. Victory means you have to do things.’ (Schmidt) and ‘I lied and lied until I believed it myself’ (Ehmke).

Provocative, political, complex, intelligent, challenging: Democracy is all those things. The Empire Theatre should have been full. This production deserved it.