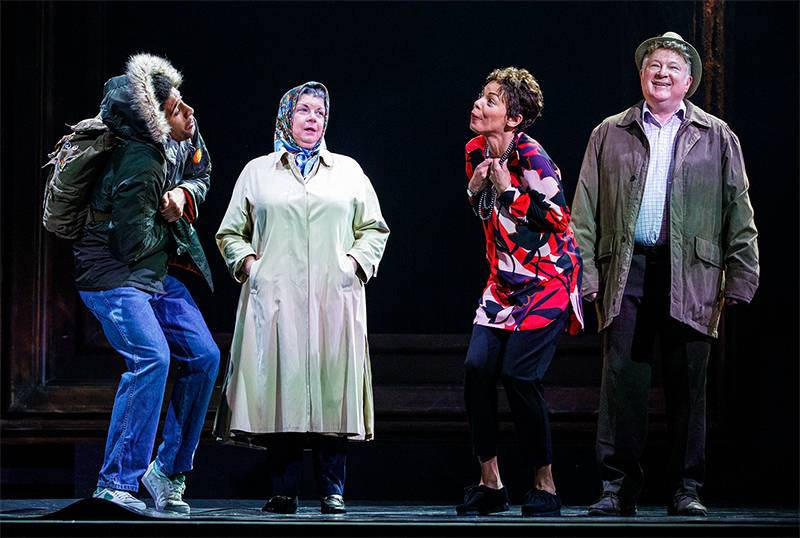 A touching and gripping adaptation of a deeply personal work

Handing your memoir over to a playwright to adapt must be a terrifying prospect. Tanika Gupta, the playwright tasked with taking Jackie Kay’s deeply personal work and translating it for the stage, admits it was a difficult project for her too. She wrestled with the idea of using a narrator but decided against it. She fleetingly attempted to put Kay’s turning and twisting narrative into a linear structure but, again, changed her mind. What eventually makes it to the stage tonight for its world premiere is a touching and gripping adaptation of a very special work by the current Scottish Makar.

Red Dust Road was published in 2010 and tells the story of Kay’s journey to trace her roots; a journey which took her to the Highlands of Scotland and to the titular red dust roads of Nigeria. Here on stage the audience are jumped around this path; a path which, just like life, is not a straightforward journey but rather more like a jigsaw puzzle needing to be pieced together.

Sasha Frost is endearing in her role as Kay herself, taking on the innocence and vulnerability of the child Jackie as she first learns what adoption means, and then on to the confident, proud woman who decides to venture to her birth father’s village in spite of his absence.

Despite the myriad of locations, the set is relatively simple – just one large picture frame capturing key moments in the characters’ lives; a twisted wooden root cutting off one corner perhaps symbolic of the picture not being perfect, and even indicating the importance of finding one’s roots.

Yet this is a story not just of an adoption but of cultures colliding, exploring questions about race, identity and self-discovery. The cast of characters who surround Frost bring these lessons to life with humour and poignancy. Elaine C Smith is a force to be reckoned with as Kay’s mother and Lewis Howden is her perfect foil as Kay’s father. Declan Spaine is every inch the annoying older brother throughout.

The audience tumble into the lives of these people and will Kay’s first meetings with her birth mother and father to be everything she always imagined. However, those who have read the book will know that this is not the case. Although she is able to meet with them and create a relationship of sorts, both wish to deny her existence to their respective families, wishing instead to brush what happened all those years ago under the carpet. In that sense, it could be seen as a sad tale, but there is so much warmth in Kay’s friends, family and supporters – and some quirky additions to the script with the inclusion of an Address to the Haggis and some of Kay’s poetry interspersed throughout – that it is difficult not to smile.

If there is a shortcoming it comes in the accents, with both the families from Nairn and the locals in Mull speaking identically to their Glaswegian counterparts. Given that the production is heading to Inverness, it would be more authentic if the sisters of Elizabeth (Kay’s birth mother) had a more North East Highland twang.

Kay is in the audience tonight, and it must be a strange thing to watch your own words, your own life, your own family members be portrayed by others on stage. Judging by her enthusiastic applause as the curtain comes down, Red Dust Road has been a worthwhile journey.