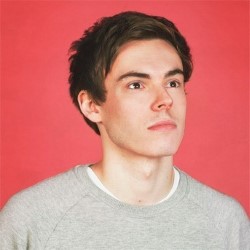 Buster of rhymes, Rhys James returns to the Edinburgh Festival Fringe with his show Remains combining jokes that are just vulgar enough and sometimes rhyming. The 24-year-old comedian has a unique talent for combining video, poetry and authentic gags into an hour of stand up magic, like a unicorn that’s had a concussion.

James possesses a stage presence and confidence rare for a young comedian making him enjoyable to watch and hard to take your eyes off of. From the start of the show he’s off like a rocket, with the usual jokes about latecomers, and the shipping container we’re sitting in being hotter than a thousand suns, better than average. He goes on to do some poetry on his special “poetry mic” about white struggle and lad culture leaving the audience stunned with the articulate and comical ramblings he completes. If stand-up doesn’t work out James could release a white lad struggle rap album.

The show starts to get drawn-out near the finale, running low on energy preventing the snappy ending the audience is hoping for. Overall James is very charismatic, witty and quick throughout the show, appealing to all ages with his views on current trends and displaying insights beyond his years.

James is seriously gifted with words and knows the right buttons to push to make the audience crack up by gauging what gets the most laughs. His joke about Super-Dry is worth the ticket price alone.